In most games a turret is something that you come across in a conspicuously empty area. You try to advance, but find that it is impossible to leave until you "interact" with the nested machine gun by pressing a button and watching a flood of dudes run into your crosshairs. After you have held a trigger down long enough to kill a million men, the way forward is magically opened.

In Deus Ex: Human Revolution, a turret is something that simultaneously hates you and presents more meaningful choices than most games from the last ten years. 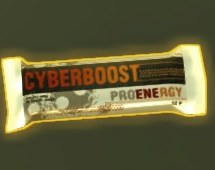 Cyberboost. When life's got you virtually down, grab the boost!For example, an automated turret sits at the end of a hallway that you really want to explore. There's a ladies' bathroom, a computer full of emails just begging to be snooped through, and several dozen future candy bars and future beers strewn about on someone's office floor.

You could bypass the area entirely by stacking a few crates, climbing them, then using your augmented super jump to reach a rafter that leads directly to your objective. You'll miss out on all the goodies, but you'll also get by in record time and receive a sweet XP bonus for not being seen.

You could step into the turret's line of sight and throw a fire extinguisher as it starts shooting. The turret's projectiles will hit the extinguisher, releasing a cloud of gas that obscures its vision momentarily as you dash into the women's bathroom.

You could explore a bit, finding a convenient air vent (aren't they all?) that safely leads directly behind the turret. Once there, you could stack cardboard boxes directly in front of its sensor then go about your business. If you have an arm strength augmentation you could even pick up the turret and make it take a time-out with its face in a corner.

You could hack a computer in a nearby room and gain control of the turret, disabling it completely or telling it to kill your enemies. If you choose the latter, you can lure a bunch of dudes to their death in a pile at the end of the hallway. Or you could pick up the turret and stroll through the rest of the level as the machine does your killing for you. For the hell of it, you could throw the turret with enough force to kill someone.

You could shoot the turret with a gun or an explosive until it dies. Why would you do this?

You could use an aug to turn fully invisible and make a mad dash for one of the rooms before the effect fades.

You could backtrack to an adjacent room, finding a weak spot in the wall which you could punch through. With your robot arm. That can PUNCH THROUGH WALLS.

That's just one turret in one hallway. I assure you that there are many more hallways and possibly more rooms.

Human Revolution's depth extends beyond handling turrets and bad guys. Keep an eye out and you'll spot hand-written notes with vital information such as codes and passwords, wisely taped to the sides of monitors or scattered on desks. These aren't always glowing clues which can be collected (though those can be found as well), but carefully placed details that reward people who actually pay attention to their surroundings instead of mashing their face against everything with a prompt.

In many ways, Human Revolution is what my circa-2000 self hoped most games would be like in 2011. Back then it only made sense that developers would continue to flesh out increasingly realized settings, implement more interconnecting gameplay systems, and give players the opportunity to approach problems in a number of ways from direct and violent to thoughtful and exploratory.

Of course, where the industry actually wound up was more miserable than the worst cyberpunk dystopia. More often than not depth is replaced with streamlining. Meaningful choices are avoided because many considered it a waste of time to develop content that a player might bypass. When someone announces a new title based on a classic game, they use phrases like "we're updating the parts that made the original successful" which means "we're making a Call Of Duty or Gears Of War clone". 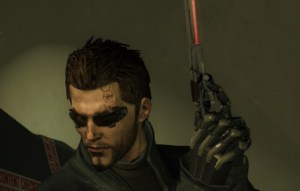 S.T.A.L.K.E.R. and Far Cry 2 come to mind as other excellent genre-blending games that give the player numerous choices. Those choices, however, tend to be fast-paced or reactionary and based on chaotic systems that primarily cater to combat. Deus Ex: Human Revolution encourages a slower, more thoughtful approach that makes the player feel in control. It scratches a very specific itch that has been largely ignored for the last ten years outside of Vampire The Masquerade: Bloodlines and Alpha Protocol, two games that sadly did not have the sort of impact on the industry that Human Revolution might be able to muster.

Maybe I'm being unfair. After all, who doesn't like boss fights? Aside from the people who don't want to fight a boss, I mean.

On the whole, Eidos Montreal has created a decidedly rich and complex RPG shooter in an era where most of the gaming press has decided that such a fantastic thing is somehow antiquated. Thanks to their hard work, you will believe that a cybernetic man with a goatee and cyber shades can sit in an air vent with a stack of bodies, eating a tub of energy bars and slapping laser sights onto tranquilizer guns.