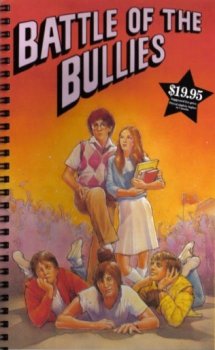 I'm not sure why I was bullied in high school. The guys dunking my head in the toilet said it was because I was a nerd and got good grades. But I only got good grades from being dunked in the toilet and learning how to predict test answers from patterns in feces. So a cause-and-effect chart of my bullying would be like that picture of two hands drawing each other, except one hand is large and toned and the other is scrawny and wearing a pink slap bracelet my mom bought me.

I was often bullied after band practice. Bullies hate band members for fear that they'll compose an anti-bullying melody to counteract the "na-nana-naa-nah" taunt popular among children. Sometimes while getting bullied I'd start crying. This, of course, was the worst thing to do because it perpetuated the vicious cycle of bullying. My tears would evaporate into the atmosphere, then return to the earth as rain that would eventually be purified into the fountain water that bullies drink.

Sometimes I'd get bullied while driving the driver's ed car. The guy behind me would give me a wet willy so hard that his finger would poke through my eardrum and into my skull, damaging the part of my brain that processed depth and time. The horizon would become a vertical precipice and I'd start seeing things in reverse. Also, for some reason, if I stared at other motorists long enough I could see their deepest secrets. I'd usually end up crashing the car and killing everyone inside. We'd then find ourselves in a hell based on my school cafeteria. The tiled floor was a chess board that we could only traverse in certain patterns according to a set of esoteric, ever-changing rules, while a two-headed McGruff the Crime Dog tried to eat us alive.

One time a bully squirted me with ketchup. Looking him in the eye, I dabbed some ketchup on my finger and licked it. He ran away, figuring that anyone willing to lick ketchup from a BPA-rich plastic bottle must be crazy. For the rest of the day I could feel the BPA molecules bullying my estrogen receptors.

Eventually I realized that the 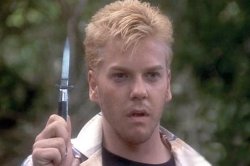 only way to avoid getting bullied was to bully someone else. Video-game nerds seemed like ideal targets, so I tried picking on a guy who looked like he was LARPing as a character from Mutant League football. Unfortunately, he turned out to be the captain of the football team. He punched me so hard that I vomited over the soda fountain in the cafeteria. As I watched my vomit swirl down the soda fountain drain I wished that it would harden and clog the pipe, and then Gatorade would pour from the fountain and drown the whole world.

Once I got bitten by a radioactive bully and gained a special mutant power. Whenever someone shot a spitball at me I'd enter Bully Time and see the spitball coming in slow motion. Sadly, I still couldn't dodge the spitball, so all this really did was prolong my suffering.

A bully was diving into the school swimming pool when he saw what looked like his reflection in the water. But upon closer inspection it was actually the body of a bullying victim who'd drowned himself. The bully realized that if he could mistake himself for one of his victims, they must be human beings just like him, meaning that he could draw upon his own fears and weaknesses to devise even more effective ways to torment them.