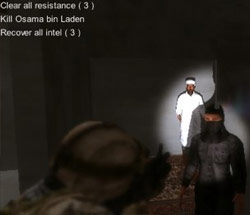 Throughout the convention, the intermittent defense of Obamacare, government stimulus and other Obama policies was mostly drowned out by repeated celebrations of the auto bailout and bragging about killing Osama Bin Laden. The Bin Laden cheering was downright unseemly at some points. Virtually any speech or video clip could suddenly turn to a solemn reference to Obama's "difficult choice." Before you knew it, lowlight helicopters were flying through the sky and Obama was announcing Bin Laden's death for the fifth or sixth time that day.

Staunch liberals have been queasy about celebrating Bin Laden's death since people ran out into the streets chaniting "U-S-A!" when they heard Bin Laden was dead. That outrage at the mob is not completely fair: we've been celebrating the deaths of wicked people at least since one was taken out by a falling house. It's hard to imagine a bigger fucker more deserving of eye bullets than Bin Laden, but the Democrats bringing the operation up every half hour like an oven timer went off got to feeling like they might show people cutting Bin Laden's balls off or dancing around with his corpse.

Probably the biggest disappointment for progressives at home was Massachusetts Senate Candidate Elizabeth Warren. Her populist, anti-corporate messaging has been a magnet for donations and interest in her Senate run, but she's a shitty politician and she is going to lose to Scott Brown. It's as stark as that. Her speech came across as a thin warble, polemic toned-down to a few effective jabs at inequality, intended mostly as a means to smear some of her liberal goo onto Obama. 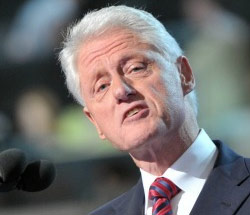 The high point for Democrats - a rambling, devastating attack on Romney by Bill Clinton - was almost sad in its channeling of the collective need to recapture lost glory. There was some sense to the nostalgia. Clinton dealt with the tail end of a recession, presided over prosperity despite high taxes relative to today, and he was the target of a firestorm of right wing anger only surpassed by the one that has nearly consumed the Obama administration. He could vouch for Obama.

By the time Obama finally took the stage on Thursday the crowd was primed for inspiration. They were primed to hear details. They wanted to see the road map to a better tomorrow. What they got instead was an odd admission of failure by Obama, followed by an attempt to abdicate all responsibility for his achievements to "you." The speech was fine. The details were thin. The hope was intentionally dimmed to a line about cutting in half "the growth of tuition costs."

"Yes, our path is harder - but it leads to a better place. Yes our road is longer - but we travel it together. We draw strength from our victories, and we learn from our mistakes, but we keep our eyes fixed on that distant horizon."

He sounded less like a President and more like a therapist laying out the long road ahead in our recovery from prescription horse pill addiction. The crowd at the convention ate it up, but they've been programmed to by George Stephanopolous and children singing about Obama in classrooms. The two parties aren't equally bad. One is evil, the other is pathetic. For the rest of us, we had little reason to be inspired by either convention and every reason to be concerned that we're going to be eating a lot of bread sandwiches in the coming years no matter who is elected.

Zack Parsons is the author of Liminal States, a sci-fi/horror novel about bugs and America, and a frequent contributor to Fox Nation's comments section where he goes by the pseudonym Obamanation1488.