Before every game Dodger fans engage in the ancient ritual known as "pounding a few in the parking lot before the game", because Lord knows baseball games, especially ones where the Dodgers are being tolerated, aren't very exciting without being so fucked up that you fall off the upper decks to your death, eliciting a loud cheer from all in attendance. 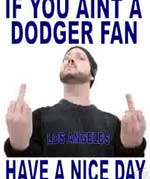 So if I'm a Dodger fan I should have a bad day? That's some crazy logic you got there!Legend has it that this tradition started when a fan was told that they couldn't consume alcohol in the parking lot to which they promptly replied "fuck that" and did it anyway. Official stadium policy forbids tailgating but the rules of man have little authority at Dodger Stadium. Besides, is it really tailgating when you're doing it out of a 1989 Toyota Corolla?

As soon as we hit up the liquor store so my friend could cash his paycheck and buy the cheapest imported beer possible (we're a little more upscale than your common Dodger fan), we were off to Chavez Ravine!

Since Dodger Stadium was built on a site not for convenience, but to displace the largest number of migrant farm workers possible, getting into and out of the parking lot can be a pain in the ass. Unless you show up six hours before the game, you will most likely miss innings one through eight trying to find a place to park. Most people leave near the second inning in order to beat the traffic. If you decide to stay until the game is over you might as well sit in your car and wait for the next game.

After drinking enough beers to last us through the next six games, it was time to enter The Pavilion, the worst place on Earth.

The hierarchy at Dodger Stadium is as follows:

Our tickets were for the right field All-You-Can-Eat pavilion, a no man's land that is not even physically connected to the rest of the stadium lest the virus spread to Vin Scully's booth and send him to a timely grave. Segregation is alive and well at Dodger Stadium. The Pavilion is known as the "beaner section" as my Hispanic friend calls it. Going to a baseball game is popular among Los Angeles' Hispanic population because it doesn't require an ID card to attend one.

Don't feel bad though, The Pavilion talks plenty of shit during the course of a game. I would have thought I was at a klan meeting if not for all the Spanish. There was a Japanese tour group sitting in front of us that must've taken a wrong turn somewhere. There were snickers and poorly thought out jokes. "I bet they're here for the all-you-can-eat dog!" Wrong stereotype guys, but better luck next season!