The Most Hallowed Records Of All 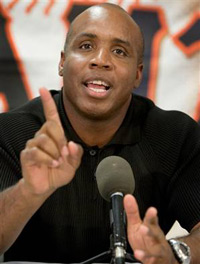 When Barry Bonds hits his 756th career home run at some point in the next few weeks, he will surpass Hank Aaron and claim ownership of the home run record, the most revered number in sports. Not too many fans are pleased about this, as Barry Bonds has been linked to steroids through the most rock-solid unproven allegations that have ever been repeated ad-nauseum in the history of ESPN and sports columnists.

Bonds' involvement with unsavory dealings doesn't end with steroids. It has been rumored that he is the recipient of performance-enhancing nanotech augmentations that allow him to see in the dark and fire anti-tank rockets with great accuracy. Additionally, Bonds is credited with the design of the Nintendo Virtual Boy.

Public opinion of the man is worsened by the fact that he is a total douchelord every time he appears on television. When asked about his favorite color during a press conference, Bonds responded by scooping up the reporter's 12 year old daughter and tossing a handful of ammonia-filled baseballs into the crowd to secure his escape. In another infamous incident, Bonds was ambushed by a local television news crew in a grocery store parking lot and questioned about his use of steroids. He ate the camera whole, unhinging his jaw and twisting his neck back and forth to fit the ungainly piece of equipment in his gullet. This horrifying scene unfolded on live television, lasting nearly three hours.

It's only natural that fans will be saddened when such a controversial man breaks the home run record, but that's no reason to stop loving sports. There are plenty of other great records out there to focus on!

2,208 career tackles by Olaf Kreiger, who is generally considered the worst professional chess player in history.

37 consecutive races won by jockey Aaron Timmons before officials banned the strategy of making your horse run around in a small circle on the Start/Finish line.

1 successful attempt by Pete Rose to gain entry into the Baseball Hall Of Fame by buying a ticket at the front gate while wearing a Groucho Marx glasses/nose/mustache disguise. He still wanders the halls of the museum, searching for the other players by night and curling up inside a hollowed-out Babe Ruth statue during the day.

30,518 autographs signed by the exceedingly polite NBA star Gilbert Arenas in one sitting for a young fan with short-term amnesia before collapsing due to severe dehydration.

.825 - Joe DiMaggio's batting record over the five appearances he mistakenly made at the plate without a bat.

15 field goals missed by Mike Vanderjagt because he was giggling at funny noises made by the holder just before the moment of impact.

5 occasions where Roger Federer, the world's greatest active tennis player, has been recognized in public. Three of these spottings were made by members of his family, who often lose track of him when he stands near a group of two or more people.

18 pit stops by Jeff Gordon in a single Nascar race because the Check Engine light was on and he had to find out what the heck it was trying to tell him.

1,302 feet cleared by Max Tierney in an olympic long jump event before someone caught up to him and explained that only the first jump counts.

0 total wins for Tiger Woods on the toy-grabbing claw machine that comes standard in every golf course's clubhouse.

37 goal celebrations by Gordie Howe that involved kneeing an opponent in the neck, the lowest number of any player in the history of professional hockey. 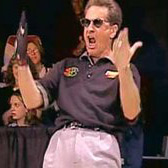 10 holes in PBA pro Pete Weber's bowling ball, all of which are utilized in the unique granny-style delivery that has earned him literally dollars and some fans.

2.5 naps per game for 80 year old Penn State football coach Joe Paterno during the 2006-2007 season. This does not include naps taken during halftime, any bouts of dementia where Paterno thought he was dreaming while he was actually awake, or temporary comas sustained while placing earphones on his head.

18,620 minutes of the television audience's collective time that was totally wasted by Karl Malone each and every time he went through his goofy free throw shot ritual.

1 banning of Floyd Landis from the Tour De France for having more testosterone in his system than the French are used to seeing, which in theory should eliminate every foreign athlete in the competition, forever.

1,029 team flights that were missed or delayed in the 1970's when baseball teams encountered airport mustache detectors.

312 near-fatal injuries sustained in the last World Cup, going by the number of players that dropped to the ground and rolled around in agony. Amazingly, after seventeen apparent gunshot wounds to the face and numerous decapitations (caused by one player from the opposite team lightly brushing his shoulder against the shoulder of his opponent while running by), every player survived the tournament.

12 Gentleman Jim Corbett bouts that were canceled in the 1890's due to seedy audiences and their refusal to comply with each venue's "two hat minimum".

100 percent of a cheerleader's cheers that actually improve her team's chances of winning.

See? The world of sports is wide indeed, so don't let one jerk's record ruin everything for you. Instead, fixate on the new number of your choice and have fun defending its honor more than you've ever defended a loved one.