There are plenty of writers eager to lock horns with the emergent narrative of Trayvon Martin as a thug deserving of death. I'll leave that particular argument to other people. What interests me more is the sudden resurgence in apparent fear of pot smokers. Throughout the Wagist article, and the gleeful dissection of Trayvon's twitter history by other sites, intense focus has been placed on Trayvon's possible use of marijuana.

It all started with the revelation that a school suspension in Trayvon's recent past was caused by an empty weed bag discovered in his backpack.

Miami Gardens teenager Trayvon Martin was suspended from school, because he was caught with an empty baggie with traces of marijuana in it, the boy's family attorney has confirmed.

An empty weed bag is evidence Trayvon needed to throw things away.

In addition to the intense Scarface-like Facebook drug dealing on Facebook, Trayvon's friends have offered further suggestions that Trayvon was "on drugs." Trayvon's friend with the most hilarious nickname to see referenced on Redstate, Skee Dollas Nickuhs, blazed a blunt for his fallen friend Trayvon and posted a pic about it on twitter. 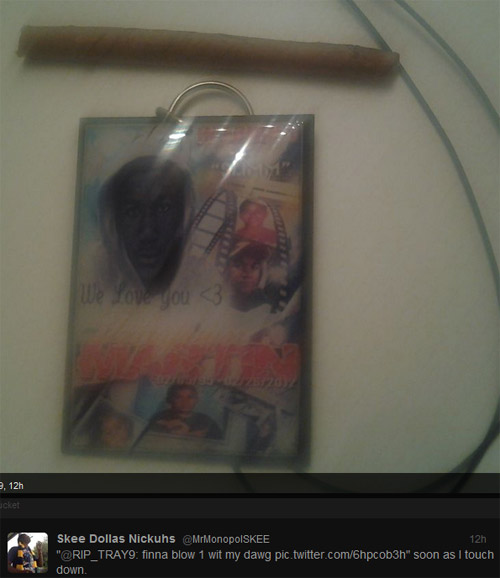 Smoking marijuana is basically legal in some states. A majority of Americans, according to Gallup, not freeweedballs.biz, want to legalize marijuana completely.

When I was seventeen I was doing exactly what Trayvon Martin was doing. Exactly what, according to a study from a year ago, 40% of high school kids are doing. I was smoking weed with my friends. It does not make you a bad person and it definitely does not make you more prone to violence. Fights break out when people get drunk, discussions about atoms being planets break out when people smoke weed. Even the burn outs in high school were only ever arrested for pot-related crimes.

Where did this sudden sanctimony over marijuana come roaring back from? Has Reefer Madness returned?

No, it's the simple binary of crime. Gun owners are very familiar with the concept. They like to say, "If you outlaw guns, then only criminals will own them." For Trayvon, smoking marijuana was illegal, and if he smoked it that makes him a criminal. He fits the profile in so many other ways with his "gold teeth" and underage tattoos (of his mother's name and praying hands) and gang activity (in the form of a friend using a gang sign on his own twitter). If you can prove a dead child smoked marijuana, you can prove he was a criminal.

And criminals, thugs if you will, are terrifying.