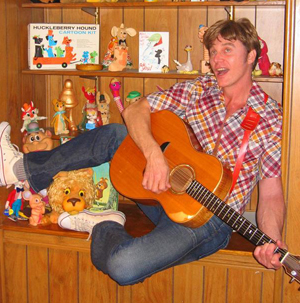 PROTIP: If you are pushing 50, make sure no one takes a picture of you doing THIS.

If you asked “Who’s John Kricfalusi?” then you’d be right. John K. is the creator of the Nickelodeon hit The Ren & Stimpy Show, the Fox Kids blockbuster(???) Ripping Friends and the revival of Ren & Stimpy on Spike TV’s wildly successful(NO) animation block, titled “The Gary the Rat Power Hour Brought to you by Bowflex.” While John K. had a successful run with three televised cartoon series - two of which are Ren and Stimpy - his Midas touch of failure seems to haunt nearly every project he works on. Here’s an example: John K. was one of the first people to conceive of an internet business model based entirely off of web cartoons. I would consider him less of a human tragedy had he created a machine that burns money and is fueled by priceless family heirlooms and immortality potions.

John K. is known for being a lightning rod for controversy in the same way that mole people 3000 feet below the earth scrawling comments about “the Jews” on their cave walls are. Since no one would dare give him money to fund another useless project, John has once again turned his sights to the internet, and like all washed-up “celebrities” has his own blog where he tells you how CARTOONS SHOULD BE and how the world of animation is tragically incomplete now that he is unable to share his unique vision of living up Bob Clampett’s dead animator ass with the TV-viewing public. The most disturbing thing about his blog is that it actually delivers interesting historical information, but it must be filtered through John K’s rose-tinted laser-guided Nostalgia Vision and his thinly-veiled flirtations with one of his female animators who is in her 20s, who he may or may not be fucking (John K. please confirm this). Just do a CTRL+F for “Katie” and you will find such preceding words as “Goddess,” “cute girl artist” and “the only person to know more about Huckleberry Hound than me.”

But if the fact that John K. has become the weird musty-smelling guy who hits on preteen girls at the flea market doesn’t make him lose his hero status, the fact that he has a MySpace should. I’m so happy that we live in the future, where we can not only find out what happened to famous figures from our past, but also post YouTube videos of hilarious skateboard accidents on their personal web sites.

And just remember, should you meet John K. in public, you can make him shit blood by saying the word “Animaniacs.” 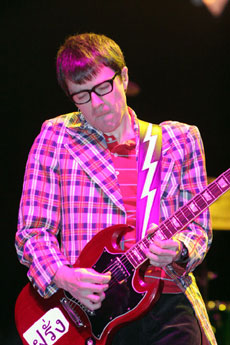 This one is especially painful for me because, as a tremendous fan of weezer, the lessons taught to me by their songs such as “be a tremendous pussy” ensured my virginity and the virginity of many other young men throughout the 1990s. This decade was full of similar self-destructive messages; for example, the theme of the TV show Friends seemed to be: “If you’re in love with a woman, whine like someone pulled the heads off of your Barbies and be sure to totally fag up the room.”

As easy as it is to loathe the man now, I do have a small bit of sympathy for Rivers as he gave us two of the greatest Alternative Rock albums of all time, back when Alternative Rock actually got its own section in record stores as opposed to the “rap” and “not rap” classifications of today. Here’s a fact: their fantastic Blue Album was so popular that if you lived in the suburbs and didn’t own it, it was sent to you in the mail for free, like fabric softener samples(this is a 90s reference that you children are so fond of!). And if you threw the CD in with your laundry, you would smell like catchy pop hits and burning plastic, much like Justin Timberlake before he began to stink of Jheri Curl and Cameron Diaz’s underthings.

But, for Rivers, the good times wouldn’t last (that is my Behind the Music segue).

Weezer’s second album, Pinkerton, came out in the fall of 1996, but by that time America was too caught up in Tupac ghost sightings to care. So instead of having pride in making one of the best albums of the 1990s (paging Dr. David Thorpe), Rivers did the most rational thing possible and went into hiding for five years, on a sabbatical where the purpose seemed to be “become batshit insane and forget everything you learned about music.” This is why in 2001 the Green Album seemed to be written and performed by the Soulless Songomatron 5000, (responsible for all of Aerosmith’s ballads) because each song on this album can be displayed as a simple algebra equation. They followed this album with 2002’s “I Swear We Will Be Good This Time, For Reals,” which did not deliver on its promises or poor grammar, and is so forgettable that the very concept of this album actually phases in and out of existence. In fact, if you reload this page, the previous sentence may be gone! Weezer’s most recent popular hit, “Beverly Hills,” has the distinction of giving the world a “We Will Rock You” for the 21st century, except instead of about rocking it’s about being a nerd.