A wide-eyed man in an orange jumpsuit blotted out the clear blue sky, wobbling as an unseen crane on the launch pad lowered him onto the Endeavour's nose. Biting down on his lower lip, the launch prep crewman steadied himself and reached a wavering hand toward a slip of paper tucked behind the shuttle's windshield wiper.

In the cockpit, Hank Freedom scowled. His co-pilot and engineer silently ran through their pre-launch inspections a third time, keeping busy. No words had passed since the single sheet of paper on the other side of the glass before them had been reported to mission control, putting a halt to the planned launch.

The nameless man in the jumpsuit allowed himself a relieved grin as the tips of his forefinger and middle finger closed on one fluttering corner of the note, plucking it free. Turning the sheet of paper over, he pressed it against the windshield for the shuttle's crew.

My car door scraped your spaceship. Not leaving any contact info because I can't afford an insurance hike, but I wanted to say I'm sorry about your paint job!

"Son of a bitch," Freedom bellowed. "Now we've got a repair job on our hands. This mission's as good as scrubbed." 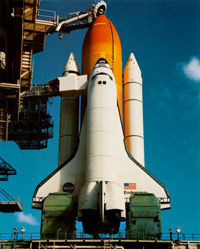 "Maybe not." Appel Piestrom rubbed his chin. The grey patches in the engineer's goatee suggested a decades-long career of stressful situations such as this one. He was only twenty six. "If it really is just a surface scratch, we'll make our window."

The captain nodded. "I just don't see why people have to park so close to the damn shuttle."

"When you share a lot with the state's largest used kitchen counter retailer, things like this are bound to happen." George Washington, the co-pilot, had the far-off look of someone recalling a very sad moment. "People will have their used kitchen counters." He sighed. "Sometimes at a cost greater than they had ever imagined."

"Still," Piestrom pressed on, "I the guy that dinged our shuttle was caught on one of the surveillance cameras. That man needs to be taken to court."

Shaking himself from the chill that had swept over him at the co-pilot's words, captain Freedom turned to his engineer.

"No, it's no use. He'll just use the wolfman defense. Trust me, my sister-in-law is a lawyer."

"You know, the wolfman defense," Freedom insisted, but recognition did not creep into his crew's faces. "Let's say the guy gets taken to court. He claims that either A, a wolfman did it, or B, he turned into a wolfman himself, and is therefore not responsible for his actions. It works all the time. Something to do with reasonable doubt."

The uncomfortable moment that followed was mercifully interrupted by the comm system.

Mission control informed the crew that repairs would be completed with ten minutes in their launch window to spare, and asked if anyone had lost a few bolts and an important-looking computer chip while entering the shuttle, because the items had been found at the base of the Endeavour.

"Negative, mission control." Strapped to his chair, Freedom regarded the sky, pictured the journey ahead. "I suppose we could have had it worse. Remember what happened to the Journeyer?"

Journeyer's maiden launch was never far from the minds of NASA employees. The shuttle's cargo bay had been packed with nitroglycerin, which was to be used in scientific experiments aboard the International Space Station. When the cargo bay had no room left, the launch prep crew had made room in the booster rockets by draining a third of the Journeyer's fuel.

When the shuttle's crew had been strapped in, they were asked to hold crates of nitroglycerin in their laps, and to clear out the glove compartment to stow a few more vials.

As always, the captain had worn his lucky necklace that day, an alternating pattern of dynamite sticks and road flares hanging from the silver chain.

Before the Journeyer's countdown had even reached 7, the engineer had fatally stabbed the other two men in the cockpit and shot himself in the head.

"That was a hell of a mess," admitted Piestrom. "All things considered, we are pretty lucky."

As if in response, the shuttle shook ever so slightly as something impacted the hull far below.

The co-pilot licked his lips, carefully considering his words.

"Sir, it appears that some neighborhood children knocked a ball through the primary fuel tank's decorative french window. The curtains managed to contain some of the damage, but they're only lace. The mission has been scrubbed."