Common Reasons For Returned Purchases At The Dynamite Store

The Dynamite Store is the United States' second largest retailer of dynamite and dynamite-related accessories. Their policy is to grant all requested refunds, asking customers to explain the reason for each returned item so that The Dynamite Store can better serve them in the future. These are the most common responses.

- "It kept rolling off the bread. Yes, I suppose a hot dog bun would have worked, but if I had hot dog buns why would I need the dynamite in the first place?"

- "There was an error on the label. Look at that very closely and tell me if you see any markings that indicate which end is positively charged and which is negatively charged."

- "To be honest, I bought this dynamite with the intention of returning it today. I just needed it to wear to my prom. Look, it's still like new. The tag's still attached and everything."

- "Once I got home, I did a few measurements and it turns out this stick is waaaaaay bigger than an ant. You got anything ant-sized?" 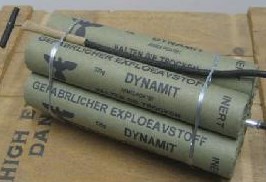 - "My kid says I got the wrong one. I'm supposed to get a Nintendo U? HD? Like an iPad or something I guess. Hell if I know. Just give me the one that's closest to a Nintendo."

- "Is it possible to return an entire case minus the one stick that I used? I was under the impression that this stuff was incredibly powerful. One of your sales associates reassured me that it was the most effective dynamite on the market. Is he here? Because I'd like him to know that it only provided light for a fraction of a second and it was loud as hell. Completely inefficient. For the price I paid, I expected each stick to light up a room for hours, if not days. Even if these lasted longer I doubt I'd be able to read with all that noise."

- "As soon as there was weight on the stick, it slowly began to give and eventually mushed down like a tube of toothpaste. My coffee table is wobbly, and wedging this dynamite under the shortest leg will not do. Do you have any C4?"

- "Turns out I'm a ghost. I can't use dynamite at all. My hands can't even pick it up. To be honest, I'm not entirely sure why I'm able to stand here without sinking through the floor or something. Heck, if the physical world has no effect on me and the planet is currently spinning as it careens through the universe at hundreds of thousands of miles per hour, why is my spirit not just floating in space where I originally died? Anyway, if you don't mind I'd like you to go ahead and exchange the dynamite for store credit. I've got my eye on that audio book version of the Quran narrated by Guy Fieri."

- "Knowing it's there is great. It's a real comfort to have a stick of dynamite nearby in case someone breaks into my house. I just can't sleep with it under my pillow. It gives me the willies."

- "I appreciate the fact that there are so many band aids, and that they come in a variety of sizes, from normal to extra small. The aspirin are great too. Don't get me wrong, there's a lot to like. The problem is that my abdomen is torn to shreds from dynamite and there's nothing in here that can help with that. Maybe if this kit had a large band aid it would be a different story. As it is, I'm sort of disappointed."

- "To be honest, I bought this knowing full well that I'd be returning it today. I was applying for a job at a hospital even though I have no medical training whatsoever, and I thought I'd look qualified if I showed up to the interview carrying a first aid kit. If you don't take this back and refund my money, you'll be in big trouble. You're looking at the new chief of surgery."

- "She said no. I don't know what happened. It was a nice restaurant, I knelt down on one knee, and the ring was very expensive. Still, she said no. In hindsight, I suppose I bought this cake too early. Even if she had said yes, the wedding probably wouldn't have been for a few months. Hell, now that I think about it I should have introduced myself before popping the question."