I have never seen an Ensenda deliveryman.

I assume they exist. Amazon keeps hiring Ensenda to deliver things to my house and packages show up, but I don't see the deliveryman. I've eventually met all the others, so where are the Ensenda guys? What are they? Without firsthand knowledge of the Ensenda man (Ensendarator? Ensendion?) I have been forced to construct a criminal profile using every scrap of information I have.

Ensenda is Portuguese for "into sender." As in, "This creeper delivery dude put a frigging knife Ensenda." 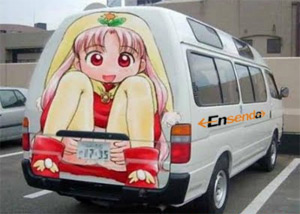 I can't be sure this isn't what the Ensenda delivery van looks like.The Ensenda man drives an unmarked vehicle. I have never seen an Ensenda van, which is troubling, because I've seen DHL vehicles and those things only deliver crap like bobsleds and elaborate cat scratching trees. Possibly he delivers things on foot, but he would have to be immensely strong to keep up with my insatiable appetite for Women's Extreme Wrestling DVDs.

The Ensenda man doesn't know what a front door looks like. Curiously, Ensenda employs a bunch of men and women incapable of understanding that my house's front door is actually a "front door." In the past their "delivered" notifications have referred to a "side door," a "door on the side of the house" apparently for the more verbose door-mistakers, and the "porch."

I do not have a side door on my house and the one time they actually referred to a feature my house has, a porch, they did not leave the package on the porch, but instead placed it on a pile of gravel next to my driveway and directly beneath a rain spout. Lucky for Ensenda I prefer all of my Japanese photo books of babies wearing gigantic pubic wigs heavily water damaged.

Ensenda employees are nocturnal. Packages from Ensenda appear without warning before the sun has even come up. Doorbells are never rung. Ensenda employees creep around in the middle of the night on your property looking for front doors anywhere they please. Are they vampires? Ghosts? A vampire ghost? Could such a thing be stoppable at all? 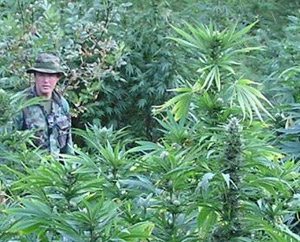 Ensenda deliverymen might be creeping around your luscious forest of Mendocino Mindbender. Ensenda deliverymen do not know how to check in with Ensenda HQ. Shipped packages will often appear for days in one location only to show up on your door without warning. Just when you think something has gone terribly wrong at the FedEx Smart Post in Daggonesboro, KY you will open your door and find a box packed full of all the Strike Witches figurines you wanted Amazon to ship all at once.

They say that the best horror movie monsters are the ones you can't quite see on the screen. This may explain why every Aliens movie has gotten progressively worse as the camera spends minutes drinking in alien egg sacs folding open and predaliens checking their RSS feeds. If this truism also applies to real life, then the Ensenda man is the scariest thing to ever have existed. No one has seen him, only the cryptoid evidence that he has come and gone.

There's one other option. It's so terrifying, so mind-freaking, that I hesitate to mention it.

What if I am the Ensenda deliveryman?

Maybe in a Shyamalanian twist I forget everything and, in my sleep, drive to the Ensenda distribution center, pick up the package, deliver it to my doorstep in the middle of the night, pee on the vent in the bathroom, leave the cap off the cherry bug juice, and forget to put away the Extreme Women's Wrestling DVDs strewn all over the bed. I don't want to do these things, I wouldn't under normal circumstances, but I have been compelled against my will to deliver my own packages. Or maybe, just maybe, in a Mamathrowntrainian double-twist, I deliver my neighbor's package and he delivers mine.

And he does all those other things too.