Dallas, 1963 - Proudly serving as part of the presidential motorcade, War Wizard spots an odd movement coming from the direction of the book depository. The nitro burnin', wheel spinnin', metal stompin' machine springs into action. It bounds up a nearby grassy knoll as if it was a dirt ramp, hitting the mound at top speed and sailing through the air. War Wizard's glorious paintjob glints in the sunny sky, the treads of its enormous tires lazily twirling as time seems to stop for one badass moment. The monster truck impacts its target just as the would-be assassin pulls the trigger, sending the potentially fatal shot wide. There, behind the book depository, the giant mechanical creature shaped like Godzilla had been hidden. As War Wizard's impact drives it sideways to the ground, fire spews from the assassin's mechanical maw, its piston-driven arms flailing helplessly. The president is safe.

Mesopotamia, 3500 BC - Following a fateful moment of inspiration, Awesome Kong gathers its primitive tools and drives out from the tribe. Eventually it comes upon a field of boulders. Finding a rock of suitable size, the monster truck parks and sets to work through the cold and bitter night. In the morning Awesome Kong returns to the tribe of humans bearing its invention: The wheel. 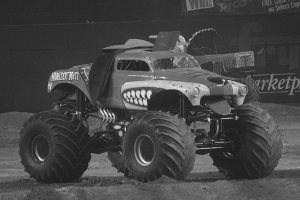 Bavaria, 1942 - Disguised as an SS guard, Monster Mutt infiltrates Hitler's Berghof chalet. Through subterfuge and careful maneuvering through the relatively tight hallways, it gains access to the kitchen area. After seducing the head chef, it convinces her to send the usual servant off on an errand in order for the monster truck to personally deliver Hitler's meal. With unlimited access to the fuhrer's food, Operation Poison Hitler's Food is a guaranteed success. Monster Mutt brings the tray through the house, into the dining room, and - perfectly on schedule - runs over Hitler. As guest and servant alike pause to process the event, the monster truck dives out the window and makes its escape, hiding in the back of a hay cart.

Philadelphia, 1787 - After a lengthy process of debate, compromise, and collaboration with its fellow representatives, Grave Digger signs the United States' Constitution. To celebrate the occasion, Grave Digger emerges from the Pennsylvania State House and revs its engine loudly as it drives backwards and forwards over a row of drably colored British Cadillacs and Impalas.

Cape Town, 1967 - Jurassic Attack performs the world's first human heart transplant. Things get off to a shaky start when it seems as though the recipient's body will not accept the organ. Thankfully, Jurassic Attack is a skilled surgeon and a quick thinker. The monster truck backs up to get a running start, then plows the heart into the chest of the patient until it fits.

Vatican City, 1508 - Commissioned by Pope Julius II, Bigfoot paints the ceiling of the Sistine Chapel in a single afternoon. Employing an innovative painting technique, Bigfoot dips an oversized American flag in glue, applies it to the entirety of the ceiling, then adds judicious and tasteful layers of glitter and elbow macaroni.

Atlanta, 1995 - Reptoid drives across an old car until it is mostly flat.

Lincolnshire, 1666 - As Sir Isaac Newton rests beneath an apple tree, Captain Crusher circles the orchard practicing wheelies. Newton observes that each time the monster truck's front tires raise up in the air, they inevitably fall back down. The mathematical genius scribbles his findings down, publishing them as Newton's Blueprint To An Unlimited Energy Source. His work becomes a practical, clean source of power that advances the world's technology by more than five hundred years. Captain Crusher's Laws Of Motion are deemed to be valid and nice, if relatively quaint.

London, 2005 - Replacing the original wardrobe artist on the set of V For Vendetta, Virginia Beach Beast does away with the Guy Fawkes masks that were to be used in the film, replacing them with hockey masks. The masks never become popular, are never adopted by Anonymous, and do not show up in protests on nerds with bad suits. Somehow this also prevents the existence of that trollface image and phrases such as "u mad" and "haters gonna hate". With humanity now slightly less annoying on the whole, our alien observers deem us to be worthy of their vast knowledge and the unaired second season of Freaks And Geeks.