Back in 2003 and 2004, respectively, Lowtax and Geist Editor wrote two of my all-time favorite updates. I'll spare you the details (and hope you read those updates, too), but suffice to say since reading them I've always wanted to eat a bunch of gross shit in front of an enthralled Internet audience too.

Although this may surprise you coming from an Internet humor writer, in real life I am a big eater. This is because my body requires a lot of energy to maintain consistency performing its two main tasks: Growing three pounds of hair a day and worrying about things. Feed me a pizza and you'll have what looks and sounds like the demented child of Captain Caveman and Woody Allen on your hands.

When I drink, however, the eating takes on a whole new level. I'm sure you've assumed that I am not necessarily the most active guy around. Again, my body's sheer hair production has a hand in that. It is compounded, however, by the fact that I am the worst cook in the world and routinely make dishes a homeless person would turn his nose up at. Combine this with my genetic tendency to avoid any and all physical activity (including cooking), and you've got quite possibly the most unintentionally self-destructive drunk since Teddy Kennedy.

But hey, I'm a forward-thinking guy. I recognized my problem and now I have the tools to combat it. In order to analyze my strange behavior, I recently took part in a two-pronged scientific test, the steps of which were:

Each of these steps were important. For instance, I conducted the test at a friend's house because my girlfriend, the sweetheart that she is, told me that if I crawled into bed reeking of strawberries and hot mustard again, I would be looking for my penis in a ditch in the next county the following morning. Given my luck, some dude wearing a Slayer shirt would mistake my severed penis for an arrowhead and display it proudly in a glass case next to his Dale Earnhardt plates. I also felt the need to try each food twice, just so I could show myself what I did to my body when I was drinking. The "surprise factor" is the general change in the food's quality depending on my level of sobriety. The "Gonk Factor" is, plainly put, how horrible the food was all in all.

A ketchup and relish sandwich on a bun 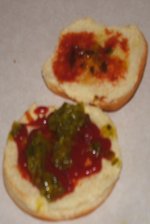 The Background: One night, after drinking two Hairy Bears (a famous local drink that involves eight shots of liquor and some fruit juice in a 32 ounce cup), I staggered home and found that I was out of hot dogs. Since my diet consists solely of diet soda and various animal byproducts, I was understandably distraught. I decided to make a hot dog sandwich sans hot dogs, and the rest is history.

Taste While Drunk: Not entirely unpleasant, if a bit too sweet. Good texture. Bun was a little stale but that was fixed by chasing the sandwich with more liquor.

Taste While Sober: Like one of the bad guys from "Attack of the Killer Tomatoes" blew a load in my mouth and then had one of his mutant pickle buddies suck his seed back out. Bun tasted and felt like rusty metal.

Surprise Factor: Dreaming you accidentally wandered out of your house naked and fell in a puddle of ice-cold water, then realizing it's not a dream at all. And that you locked yourself out of your house.

Half a cup of brown sugar 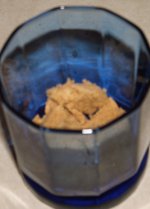 Taste While Drunk: Not terrible but not something I'd eat for dessert every meal. Gritty but sweet, slightly bitter taste left in the back of the throat is somewhat enjoyable.

Taste While Sober: Like the Easter Bunny took a leak in a pile of sand. Grit embedded in my teeth from previous night still present; I have brushed my teeth eight times today. Thought of taking another bite makes me physically ill but before I can take that next bite I throw up in the sink anyway. Today is a good day to be an Internet humor writer.

Surprise Factor: Having sex with the prettiest girl you know and then realizing you were mistaken and are actually fucking a light socket.

An old-ass cup of ice cream

The Background: Other times you're really hungry for ice cream. This was one of those times. Faced with two options, namely walking two blocks to the convenience store or eating an old McDonald's sundae that had been in the back of the freezer for God knew how long, I chose the sundae. Please note that this is an approximation of the test, since there were no sundaes around. Instead I had my friend stash two cups full of ice cream in the back of his freezer a few weeks ago in preparation.

Taste While Drunk: Not too bad at all. A little freezerburned on top, but pretty normal-tasting after that. Tasted like normal ice cream, really.

Taste While Sober: You know how Jelly Belly makes all those weird Harry Potter jellybeans, like dirt flavor and so forth? Imagine they switched over to ice cream and their flagship flavor was dog shit rolled in freshly mowed grass. So freezerburned it felt like it was giving my tongue, then my throat, a billion little papercuts, and the fact that the "strawberry swirl" part of the ice cream looked like blood in my mouth didn't help things a bit. 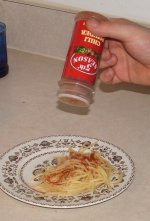 The Background: One fateful night I was feeling drunk and creative, a combination that rarely goes well unless you happen to be Ernest Hemingway (or Ernest Hemingway's corpse). I wanted spaghetti, but I was out of hamburger and sauce. Instead I boiled some noodles and layered on some ketchup I found in the fridge, then some chili powder.

Taste While Drunk: Bad. Really bad. I may have been so drunk most of my taste buds had shut down by that point, but the remaining ones taught me a valuable lesson: That I shouldn't be cooking because even Ethiopian children would kick my ass in if I tried to offer them some shit like this.

Taste While Sober: Like Chef Boyardee chugged a bottle of ketchup, chased it down with some dry spaghetti, let it sit a while, then tore his stomach open and forced me to eat the combination out of his entrails. Then, after I shit it out, he forced me to put the shit in a blender with another bottle of ketchup and eat it again.

So what have I learned? Not much, actually, since I'm currently nursing the worst hangover anyone has ever experienced, and my stomach is currently harboring something that looks like Belial from "Basket Case," only a lot meaner. Since I am writing this from a friend's house, on a strange computer, I feel slightly more obligated than normal not to throw up, since whatever comes up will likely require the assistance of FEMA to put back down.

So if you take anything away from this update, dear readers, I hope it is this: Drinking and driving is a pussy sport like soccer compared to drinking and cooking. Next time you've got a buzz and you want some McDonald's, hop in the car and head across town if you must. Just don't touch the oven. Your stomach will thank you, even if the family of the car full of teenagers you killed won't.