Escape From The Lair Of The Evil Devil

As I hiked my way through the old pine woods, the sky grew mysteriously overcast. Within moments I found myself caught in a brutal drizzle of mildly cool rain. Calling upon my extensive knowledge as an outdoorsman, I knew that I only had ten minutes to seek shelter and get out of the sprinkle before my body would shut down and die.

Covering as much ground as I could, I threw myself off the top of a hill. Tucking and rolling as I shrieked, I kept an eye out for a rocky outcrop to huddle under, a long abandoned tent, anything. An upscale resort appeared on my left but I passed it, instinctively knowing that the rates would be unreasonable. Then salvation came.

It was an entrance to a cave. Somehow, though, it felt unnatural. Wrong. The plywood boarding up the entrance had been spray painted with words like "unnatural" and "wrong" and "go away". Knowing that I only had moments before succumbing to the fierce drizzle, however, I had no choice. With a running start, I leapt through the plywood and into the cave, leaving a perfect silhouette of my body. Well, almost perfect. The head was too big. My head is actually very normal so that was wrong. Also, the silhouette didn't seem muscular enough to capture my dynamism. In retrospect, it was actually a disappointing likeness.

Picking up a convenient torch from the ground and thanking my lucky stars that it was conveniently lit, I began an inspection of my surroundings. The torch cast an eerie reddish glow upon the jagged walls of the cave. A series of bizarre paintings started before me. In the first image, a crude stick figure of a man was in the woods. 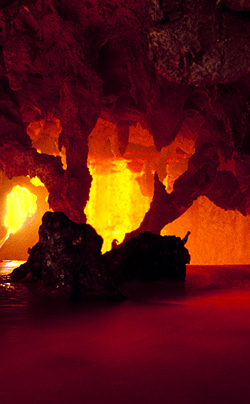 In the second painting, he entered a cave. As the painting went on, the man encountered numerous hardships. He was crushed by rocks. He fell into a pit lined with spikes. A pack of mysterious beasts tore his body apart. Like all art, it was incomprehensible. Yet somehow I couldn't shake the feeling that it was trying to tell me something.

Glancing about, I suddenly realized that I had lost my way. The entrance was no longer visible. All I could see was the light from my torch and the closest wall, which was covered in drawings of arrows pointing back the way I had come. Frowning, I took a deep breath and thought things through. This place was evil. I was sure of it. To place my trust in anything within its confines would be suicide. If those arrows told me to go in one direction, I had to go the opposite way.

Soon I came across a strange river cutting through the floor of the cave. It was red and glowy, like lava. Since the cave was not a volcano, however, I ruled lava out. This was something different. Something evil. As a man of science, I tested my theory. The liquid tasted horrible - much like brimstone. My lips, tongue, and throat hurt very much, as did the hand I had used to scoop the drink. The only explanation was some sort of curse. Desperate to return to the entrance, I crossed this river which I had clearly not crossed on the way in, careful to remove my shoes so they wouldn't get burned.

Soon the narrow confines of the passage gave way to a broad chamber, roughly circular in shape with a high ceiling. This was the lair of the foul beast. The creature was there, no more than twenty yards away from me. I froze, a mixture of dread and revulsion locking me in place.

In many ways it was a bear. It was the size and shape of a bear and it looked just like a bear. But it was also not a bear, because it was a skeleton. It was as if a bunch of bones had been arranged in the form of a bear. Like a bear skeleton, if bears had skeletons like people do. A perversion of nature. I had come face to face with true evil. Before the demon could animate and attack me, I charged into the fray.

Roaring a primal battlecry, I leapt forward and grabbed the skull, pulling it up to my face and using one hand to clamp the creature's jaw down on my flesh. The plan worked. It was too shocked to react to my surprise attack. My vision obscured by a waterfall of my own blood, I fumbled open my jacket, revealing the sticks of dynamite strapped to my chest.

"I'm taking you with me, you son of a bitch," I snarled, detonating the explosives.