The Video Game I Made about My Mom's Third Divorce 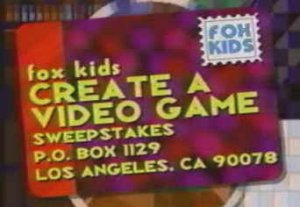 In 1996 I won Fox Kids' Create a Video Game Sweepstakes, one of those contests they announced on the Fox network in between Spider Man and X-Men cartoons. The sweepstakes gave one grand prize winner the chance to live every gamer's dream: a trip to Sega headquarters where they'd get to design their own Genesis game.

As a 13-year-old nerd, I should've been thrilled about winning the contest. But one thing kept me from enjoying my victory fully, or at all really: my mom and current stepdad were getting a divorce.

The divorce, my mom's second after leaving my dad, was pretty traumatic for me. Maybe it was all the fighting, or trying to figure out how two Jehovah's Witnesses, supposedly on a mission to save the world, couldn't even save their own marriage. The discomfort was so intense that my soul seemed to leave my body, until I was watching myself from a 2D sidescrolling perspective.

Fortunately, instead of letting the trauma wreck my life, I used it as inspiration. A lot of great art comes from adversity, so I figured that video games, which are a thousand times better than art, might benefit from it as well. That's why I ended up using my mom's divorce as the subject of the game Sega and I made.

Your mom and stepdad are yelling and throwing things at each other. While this level is mostly non-interactive, pushing random buttons will occasionally affect the volume of the yelling or the type of objects thrown, making you think you're responsible for the fight somehow.

You and your mom are in a car being chased on foot by your stepdad. This level uses an altered palette and weird distortion effects to reflect how surreal the scene feels. Press the B button every few seconds to tell yourself this is just a bad dream.

In this splitscreen level your mom and stepdad are fighting on one half of the screen while you're playing the Genesis game Midnight Resistance on the other, trying to make the explosions in the game drown out the sound of your mom yelling and throwing your stepdad's stuff down the stairs.

Your mom and stepdad are going at it again, so you call your dad and try to get him to come pick you up so you can spend the night at his house. Pick your sentences from a multiple-choice menu, trying to select the ones that inspire the most pathos. In part 2 of this level you're reading magazines at your dad's house and have to guide your eyes across the page while avoiding the white space in the margins, where all your bad thoughts and memories project themselves.

Your mom says she's quitting the Jehovah's Witnesses because of a dispute with the church over her divorce. This gives you a nightmare where you go to hell, which is exactly like your current home except with flames in the background. You have to end the nightmare by killing yourself, either by jumping out the apartment window or finding that knife your stepdad keeps telling your mom he's going to stab her with and stabbing yourself with it.

Your mom's constant yelling and erratic behavior has given you an intense fear of women, making you question your sexuality. This level is similar to the slot machine minigame in Super Mario Brothers 3, except you have to line up three segments of a human body to determine what sex you'll be attracted to for the rest of your life.

Several years later, you're trying to keep your memories of the divorce repressed. This level resembles Breakout except the paddle is in the middle of the screen and the goal is to keep the ball (your memories) from breaking through the wall (your mental defenses). This task is complicated by the paddle's tiny size and the wall's low number of bricks, which can only be replaced by special powerups or therapy sessions.