When the Great Surge of 4807 destroyed the Historical Annex, nearly all of our pre-holo history was erased in a matter of nanoseconds. All pictorial data was lost, along with our scanned collection of ancient society's "paper books" which have long-since crumbled to powder. Worker drones who scoured the charred remains of the Historical Annex only managed to recover random snippets of text from a corrupted backup of the "Internet", the great grandfather of today's Dataspace.

For three hundred years, Intergalactic Scholastic has worked to decipher these fragments of text and recover the lost chapter of our peoples' story. Having spent centuries studying the pieces of this figurative puzzle, we are confident that the course data you are about to read is an entirely accurate account of mankind's beginnings.

Accompanying the course data are visual aids which may seem alien to the point of being offensive. These are the products of an ancient technique called "drawing", which was widely used to capture moments in time before the invention of photographs, holoscans, and later universe-wide nanomaps. Since all photographs and scans up to the 38th century vanished in the Great Surge, our dedicated staff learned this ancient technique so that we could offer you the most accurate visual representation of this timeframe that we will ever have.

As we recently discovered through the miracle of modern science, the universe was created when the Non-Universe packed up its things and set off in the hopes of finding a better spot. There at the very beginning, the first human came into existence. His name was Jesus Feliciano, and he was a AA baseball player (a crude version of futureball which involved gravity and screaming). 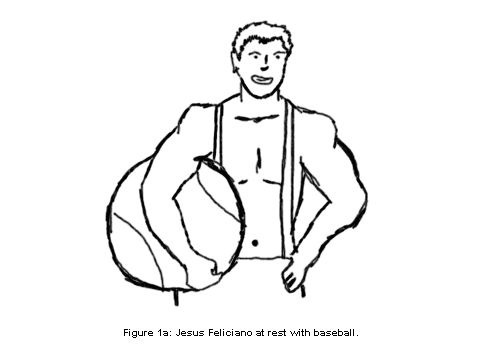 How did an entire race spawn from one man? Historians generally agree that it happened when Jesus slid head-first into home plate in the ninth inning of a game against the Appleton Papermakers in 10 A.D. The feat of spontaneously creating numerous offspring through a physical act that didn't involve a woman was made even more impressive by the fact that he began his slide in the dugout. Without a running start.

Jesus died during the act as he knew he would, sacrificing himself for mankind. This noble gesture instilled a general feeling of guilt among early humans and led to the creation of the phrase "suicide squeeze".