The greatest achievement of American capitalism is, without a doubt, the commercialization of religious and political holidays. With Halloween just behind us we are now heading into the home run derby of overeating, chintzy decorations and Japanese electronics that the naïve like to call "Thanksgiving" and "Christmas". I'm not a sentimental man, and I'm hardly a religious man, so far be it for me to bemoan the downfall of our once tender and spiritual holidays. I could care less if they turned Thanksgiving and Christmas into an amusement park full of prostitutes and feral dogs. However, as a participant in our capitalistic society I have to marvel at the accomplishments that went into successfully marketing and selling all of the major holidays.

That isn't to say that every holiday was and is an instant commercial success. For example Easter was long eclipsed by a holiday called Rat Chase Day from 1809 all the way to 1923. Eventually the Easter Bunny caught on and as rats were largely demonized and exterminated in urban America and their corresponding holiday's popularity declined. Instead of celebrating the successes of the holiday industry's efforts I would like to devote this update to remembering those holidays that almost made it to the big leagues. Some chugged along for decades before being largely ignored while others were fueled by millions in marketing dollars yet still managed to fail.

Description: When Rosa Parks sat at the front of a segregated city bus in some backwards southern state where white people tend towards stupidity and meanness she changed the world with a gesture. When Rosa Parks consumed an entire segregated city bus one piece at a time she became a legendary symbol of how much one person could accomplish for civil rights. A week long holiday was declared in her honor from November 5th to November 12th and it is celebrated by swallowing small plastic bus parts and listening to classical jazz music. On the final day of Rosa Parks week families gathered to show off the bus parts they passed through their digestive tracks and, if possible, assembled a plastic bus from their collective efforts.

Origins: Few know that Rosa Parks was never even intended to change anything in the civil rights movement. She was actually a plant by Dow Chemical intended to prompt the creation of a holiday celebrating the murder of another black woman. When the tables turned and their robotic minion's attempted lynching turned into a bold statement against inequality Dow was quick to capitalize. They printed shirts, embroidered hats, and designed a number of plastic toys. These failed to sell, so Dow wheeled their robot out again a decade later and had it consume an entire passenger bus one piece at a time. Following quickly on the heels of this publicity stunt, came hundreds of various interlocking plastic bus components that were supposedly safe to eat.

Why it Failed: You will notice I said "supposedly safe to eat". That's because in 1984, over a decade after the plastic bus pieces appeared in stores, the FDA determined that eating them caused a number of side effects ranging from headaches to a specific type of birth defect. The birth defect involved explosions.

Description: Aztec Sacrifice Day was based around the briefly popular human sacrifice rituals and cannibalism that existed throughout the empire of the Aztecs. On March 19th of every year celebrants would gather either as a town or as a family and each would take a gift and throw it into a bonfire or hearth. This senseless destruction of purchased property was intended as a symbolic and jovial sacrifice to ancient Aztec gods. After destroying their gifts to the gods the participants would drink a brew called "heart's blood" that consisted of rum and human blood drained from minorities. A number of retailers offered gifts for Aztec Sacrifice Day including expensive boxes painted gold that supposedly contained "all things pleasing to the Gods" but actually contained the decaying remains of minorities.

Origins: Aztec Sacrifice Day was created in 1956 by the Johnson Radio Company and several joint advertisers. The idea was that Johnson's radios were so well built that people would buy them and then keep them for ten to twenty years. Johnson wanted a way to sell radios repeatedly and by devising a holiday that encouraged people to destroy expensive radios and other gifts they would ensure return customers. They seeded the press with stories about grisly Aztec rituals until the practice of human sacrifice had achieved enough notoriety to merit an all out marketing blitz. They then introduced their adorable mascot Blxlotl the Aztec God of Sharing. Blxlotl appeared in advertising as an extremely pathetic and non-threatening anthropomorphic sun surrounded by catch phrases like "I'm sooooo hungry" and "I need your love too!" Even though it was never declared a national holiday, Aztec Sacrifice Day remained fairly popular until the mid 1970s.

Why it Failed: After two years Johnson and his partners were cut out of the loop by shrewd marketers who offered their corpse-filled gift boxes in place of actual merchandise. These proved so successful that Johnson had to file for bankruptcy in 1962, thereby withdrawing all overarching support for Aztec Sacrifice Day. Also, some human rights people complained about drinking human blood, but they were mostly ignored in favor of the fun. Eventually people realized they were paying premium money for empty boxes and rioted, burning and looting a number of retailers, killing minorities, and drinking their blood. This brought an abrupt end to Aztec Sacrifice Day as it temporarily depleted the supply of human blood and corpse boxes.

Description: Not so much a profit-oriented holiday as the last desperate efforts of a non-profit group to save its reputation. The National Association for Professional Animators lobbied long and hard to have this declared a holiday to stop - for one day at least - the endless stream of furry porn being churned out by thousands of amateurs across the Internet. All furries had to do to celebrate this holiday was put down their pens, pencils, and Wacom tablets for a single day and refrain from drawing 24 hours worth of crude giant wolf men fucking buildings and subways cars. The holiday occurred once, on January 10th of 1999, and never again.

Origins: The majority of furries couldn't draw their way out of a 8th grade art class and rely on professional animators to create characters and styles worth ripping off and adding genitals to. In a shocking turn of events the people who come up with characters like Gadget from the Rescue Rangers aren't really too happy with seeing people vomiting out detailed images of her being raped by a realistically to-scale horse. These animators turned to their non-profit organization to help protect their reputation and their livelihood, with limited success.

Description: Everyone loves Kid Rock! And on Kid Rock day the merry musician will swoop around on his giant eagle Lord Chisholm and deliver presents and sweet treats to all of the children. Of course nothing as stupid as Kid Rock could possibly exist, so parents buy presents and candy for their children, dress up as Kid Rock, and take to the skies on the back of Lord Chisholm to deliver presents to their children.

Origins: Initially conceived as a means for shitty candy makers to bank on the mysterious success of Kid Rock and sell excess Valentines and Easter stock, the plan was later abandoned. A few years later, in 2001, the idea was revived by Kid Rock's own management team in an effort to resuscitate his terminal career. Fliers were printed, specialty candies and gifts were produced, and less than three hundred people ended up participating in the holiday. Of them it is estimated that over 90% were either profoundly retarded or suffering from some kind of strange congenital illness that causes random behavior based on two-color promotional flyers.

Why it Failed: Because it's Kid Rock. I mean, come on people, do I have to spoon feed you all of the answers here?

Just a few of the hundreds of failed commercialized holidays! Why I didn't even get a chance to cover World's Greatest Grandpa Day or Easter Island History Month. And who could forget the Magical Balloon and Heliomas?! Not me, certainly, I've still got over thirty pieces of Heliomas memorabilia that I plan to sell on ebay. Those fucking balloon statues are worth their weight in Beanie Baby Skunks.

Self-proclaimed scientist and musicologist Dr. David Thorpe has once again used his credentials to muscle his way into the world of music criticism. This week, he continues his quest to shame you out of listening to bad music by mercilessly deriding Coldplay, everyone’s second-favorite pale English pussy-rock band. 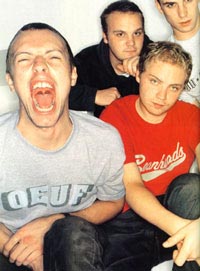 In 2002, Coldplay released an album entitled “A Rush of Blood to the Head,” which describes the all-too-frequent physical sensation of shame that lead singer Chris Martin gets when he wakes up in a pool of his own urine. The first single from the record was In My Place, a slightly peppier number in which Martin goes into full-blown poet mode to make such bold pronouncements as “Yeah” and “Oh Yeah.”

Go and read this before you head to Coconuts or Sam Goody! Your trendiness may depend on it!