Fat of the Land

Last night I took a break from coding explosive babies and reserved a little "time out" period, one for reflecting upon where I currently was in life and where I wanted to go. Naturally, my mind began to wander from one topic to another, covering my past goals and success in achieving them. I introspectively examined my reactions upon entering particular situations and how I could perhaps use the benefit of hindsight to correct future actions. This lengthy segment of time resulted in the realization of many attributes and personality traits, both positive and negative, and helped me come to one of the most fundamentally life-changing conclusions that I have ever stumbled upon: 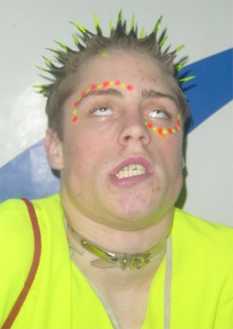 The miracle of the human body in action.

Now initially this may seem like a bad thing, since popular culture has dictated to us time and time again that fat people are inherently a laughingstock. However, my personal goal for the past few years has been to get a bit fatter so maybe my arms and wrists wouldn't look like Q-Tips with significantly more sweat, armhair, and watches. I've been pretty much the same weight since junior high school, which according to my records, was approximately 148 million years ago. Every time I stepped on a scale, it constantly shot to 160 lbs. Depending on the amount of sweat I had previously discharged from my hands and feet, my weight would fluctuate five pounds higher and lower, but it always stayed in this target range. I didn't have to work out, I didn't have to change my diet, I didn't have to engage in any physical activity more straining than putting on socks; I always weighed 160 pounds. For my friends north of the border, that equates to 238.2273 millicentiliters per stone in the Metric system. For my friends south of the border, that is the same weight as 65 kilos of cocaine. For my friends west and east of the border, I'll call for help immediately, as you're apparently drowning in the ocean. While I welcomed the freedom to lay around and never gain weight, I always wanted to get a bit fatter and distribute lard amongst my various appendages so I wouldn't look like a flesh-colored cactus with pipecleaners sticking out of its sides.

However, this didn't work out as planned. Instead of the flab going to my arms and wrists and neck, where I distinctly asked for it to go, all the cellulite ended up heading to the doughy pouch of a stomach I like to call my "doughy pouch of a stomach." This went against all my previous knowledge in the field of fat people, as I always noticed a direct correlation between the size of a fat guy's stomach and his ham-like arms. These people seemed to have their weight evenly distributed to all areas of their body, making them an all-around heavyweight. I naturally assumed the same thing would happen to me, and my diet of corndogs, Hawaiian Punch, and Baby Ruths would lead me to a proportionally larger body frame. No dice. Now I've got a gut the size of a punching bag and my daily 20 gallons of sweat smell an awful lot like chicken gravy.

So how did this happen? Why did my plans of getting fat go so wrong? After doing a bit of medical research (NOTE: I didn't do any medical research) and combining this information with my vast knowledge of common sense and astrophysics (NOTE: I don't currently possess either), I began to realize how my body works and understand the failure in my "get fat quick" scheme. Let me take this moment to share my extensive findings with you:

A helpful diagram to illustrate my point, whatever it was.

1) The human body is an incredible machine. To best understand how it works, it helps to think of it as a car with flesh and eyeballs and hair. Now this car needs fuel to go anywhere, and it can only accept certain types of fuel. This fuel is provided by large metal blocks with pumps that are shoved into a certain orifice. When the car is being fueled, it has to be turned off or else an Arab guy will yell at you and switch off the pump. Also, you're not supposed to smoke while fueling either, which is yet another reason to quit right now. So, as you can see, the body is a lot like a car, at least in the sense that it isn't anything like a car because it has more flesh and eyeballs and hair, which was my original point.

2) When swallowing something, the object is sent down the bronchial tubes to the fallopian tubes, where it is combined with amino acids and Formula 409. The object is then broken down into the following categories:

3) The body reacts differently to each category of objects it ingests. When consuming healthy food, the body breaks it down into its chemical components and then uses those chemicals to fertilize surrounding body parts. The healthiness spreads throughout your body like one of those refreshing springtime waterfall Tampons, and it rejuvenates your skin and body parts, making them less likely to fall off during intense gravitational pressure or hailstorms. If you choose to eat unhealthy food, your body tries to break it down but finds it unable to do so because unhealthy food is very complex and confusing like an electrical engineering course, only with less Malaysians. Your body wastes countless CPU cycles trying to figure out what to do with stuff like the Twinkie you just ate, and eventually it simply gives up and leaves it to rot in your stomach. Medical science has proven that when you die, they can cut open your stomach and name every unhealthy food you ever ate your entire life. They can also tell if you've ever masturbated to Anime lesbian foot fetish porn, so keep that in mind next time you decide to visit any newsgroups.

The last two categories of consumable material are harder to explain than the previous two, which is why I listed them last. Our bodies are not used to foreign substances like drugs, so they have very distinct and immediate reactions. The body tries to break down the drug atoms, but the drug atoms say "hey body, why don't you take a break and 'chill out', dude?" The body says "no way, I need to break you down or else my owner is going to fire me and replace me with a metal washbasin" and the drugs replies "well here's a little something to relax you a bit." They then begin to chemically react and produce something else, like ozone or spider silk, which gets into your bloodstream and makes you shriek goofy things like "NFL yeast!!!" while rocking back and worth and holding your head. The only way your body can expel these chemicals is through urine or exhalation, so avoid running a marathon or getting stranded in the desert after doing drugs. The final category, "other," isn't really an issue since the average human body has eaten at Burger King plenty of times and is used to ingesting these types of things.

After reflecting upon this chunk of "hard science," I began to realize why my diet had led to an uneven distribution of fat throughout my body. My constant dose of unhealthy food and drugs were confusing the hell out of it, preventing my body from properly breaking down existing nutrients and evenly distributing them amongst my organs and appendages. With this exciting new medical information in mind, I was able to craft a new diet plan, one which will resolve my problem of constantly worrying about getting unevenly fatter: I will cut out every category except drugs. Hey, I'm going to get fat and bloated regardless; I might as well get a kick out of it while it's happening. NFL YEAST!!!