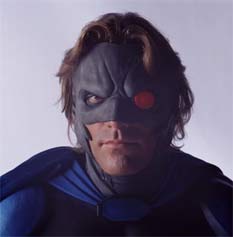 I'm not even sure what the hell Nightman's power is, but I think it has something to do with playing a saxaphone and being an asshole.A lot of super heroes gain their powers from a tragic accident. Spider man ate cookies contaminated with rat poison, Superman was irradiated with gamma rays and became the Hulk, and the Toxic Avenger…I don't remember. Considering he was in a Troma movie it probably involved bare breasts and a fat guy bleeding a whole lot, maybe a fat guy's bare breasts bleeding a whole lot. Much like these larger-than-life fictional heroes, I once was involved in an extremely minor accident and from this trauma I gained my superpower: I have no circadian rhythm.

In high school I would be dead on my feet every day because I'd be awake until 3 AM the night before. In college I was infamous for staying awake for over fifty hours and then sleeping for over 24. This isn't bragging, my power is both a blessing and a curse. Sure, I can get a lot done in thirty or forty straight hours of being awake, but after about twenty hours I tend to possess the intellectual acumen of a particularly dumb pile of bricks. I will sit on the couch in a darkened room and stare at whatever ghostly images the TV decides to beam into my living room.

It is this power that has allowed me to explore the shady underground world of late night syndicated cable programming. Many of you have heard or experienced the pantheon of paid advertisements - so called "infomercials" - that appear regularly on stations trying to rid themselves of essentially worthless and unmarketable air time. What you may not be aware of is the wide variety of shoddy science fiction, horror and mystery shows starring grade-school caliber actors and filmed on a budget that is easily exceeded by some rich kid's lunch money at some fancy rich kid school. 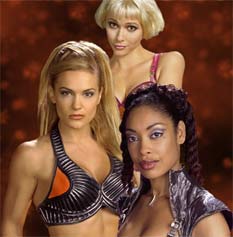 Despite what this picture may lead you to believe, Cleopatra 2525 is not a well written TV show.I'm referring to shows like Nightman, The Crow, Xena and Hercules, Cleopatra 2525, and whatever horrible science fiction they are nailing to the corpse of Gene Roddenberry this week. Poor Roddenberry is the Tupac of B-grade scifi; once he died unscrupulous hack writers and producers were free to squeeze his ghost for whatever they could. Before you fan boys of Star Trek get in a tizzy about me calling his work "B-grade", why don't you come over and I'll point out the zipper on that octopus woman costume that Shatner was humping.

These shows are absolutely horrid. They think if they can find a woman with breast implants and slap her in spandex they've got themselves a "well rounded cast". Throw in some laser guns or crossbows and suddenly they have their plot. Need a villain? Just use a guy with some bargain basement CGI teleportation effect as a "god" or put a fake giant head on some skinny man with a lisp and call him an "alien master" or something.

I think much more could be done with these late night time slots. I'm sure I'm not the only person out there craving entertainment at 3:30 in the morning, that doesn't mean I'm willing to happily except whatever two dollar crap they can shovel at me. If you're a late night TV producer I suggest you read on to discover what you're missing out on, if you're not a late night TV producer go ahead and skip to the next bulleted item.

Back Alley Operating Room
The recent glut of medical reality programming has desensitized a lot of viewers to the horrors of surgery, doctors, and bandages. The extra apathy that comes from having been awake for roughly a million years makes shocking late night TV viewers much more difficult than shocking a prime time audience. With almost no budget I think a great back alley medical reality show could be done. Visualize a blood spattered and trash filled alley, barely lit by the sodium streetlight just past the dumpster, a crackhead ex-nurse trying to revive her druggie friend who is convulsing from an OD of black tar heroin. Imagine the tension as a half-drunk pimp fishes into one of his mares with a bent coat hanger trying to catch an errant fetus. I'm not sure if late night TV has sweeps week like primetime, but if so, a sweeps episode of Back Alley Operating Room could center on a teenage runaway turned street hooker, forced to amputate her own leg with a steak knife to prevent the spread of gangrene from an artery blown by excessive IV drug use.

Vietnam: The Untold Story
I was a huge fan of the TV show "Tour of Duty" back when I was young and I think we need to have some good Vietnam era combat shows on late at night. Since no one remembers the Vietnam war, the producers would be able to take some creative liberties and tell the story of "Special Unit 103". According to my plot outline, Special Unit 103 is composed of Chuck Norris, that one really muscular Chinese guy who is in every Jean Claude van Damme movie, a midget, and possibly "Face" from the A-Team. Their assignment would be to track down the biblical artifacts that the Vietnamese are trying to harness for their evil purposes. There would be a lot of cool gun battles and chases in Egypt where General Mao would be trying to recover The Staff of Horus +3. The theme song would be "Paint it Black" because that's such a cool song. During the end credits the song would be reprised and puppets of the characters would sing along, like in Fraggle Rock.

What's in that Watermelon?
What late night TV is lacking is a good game show. Some local stations may show reruns of Wheel of Fortune or Jeopardy late at night, but that's just not the same. At 3 in the morning you are not up for "Famous Actors" let alone "Potent Potables", you need a simple game show that mostly involves guessing and blind luck. I suggest "What's in that Watermelon?" a game where contestants are forced to guess at what is inside one of three hollowed out watermelons. One watermelon will contain a fabulous prize such as a diamond necklace or the deed to a log cabin, one will contain a consolation prize (usually a copy of the home game in which you have to guess at the contents of 3 miniature watermelons, one of which contains a miniature version of the home game), and the third watermelons will contain suffering. What that suffering is will be determined by a battery of psychological questions administered to each of the contestants prior to the taping of the show. A contestant might hate wasps, tear gas, or the crushing sorrow of the death of a loved one.

Gene Roddenberry's Blast Whipcrack: Laser Cop
In the year 4040 the universe is at peace, until the vicious Psycholons attack earth with an unstoppable fleet of giant warships. Earth is destroyed by the Psycholons, but Blast Whipcrack, a member of the Laser Police, manages to escape into the outer reaches of the galaxy. He is accompanied by his gorgeous secretary Jill McFrank, Blast's wise-cracking alien personal chef Thromby, and some mysterious large-breasted alien woman with a tiny dot on the bridge of her nose. All of the characters will constantly wear spandex unitards with the exception of the mysterious large-breasted alien woman, who will frequently wear a ripped spandex unitard. Most episodes will revolve around Blast fighting the Psycholons by talking a lot to a blue screen and then talking some more to some repressed aliens and having a personal catharsis that is absolutely meaningless to the theme of the episode. Each episode will also feature a completely lackluster subplot about some Laser Cadet that they are towing around to draw geeky teen viewers.

These are just some suggestions off the top of my head, I'm sure if you are a late night TV producer you can come up with a lot better yourself. On second thought, try polling a kindergarten class, I'm sure they could top anything you might come up with.

Cliff Yablonski Does Not Support Your Endeavors

Cliff Yablonski e-mailed me again in his usual charming fashion, apparently to inform me that he has once again updated his stupid web site.

Kyanka isn't responding to his letters so I want you to tell everyone on his web thing that I updated my web thing. Tell those stupid fucking dumpster babies that if they keep e-mailing me about updating my web thing I am going to kick them so hard in their stupid ugly faces that they will be able to read the size of my boot on the inside of their brain. Same goes for you if you don't chop chop like those goddamned Chinamen. Now make those buckets of shit batter visit my web thing so I can make the big bucks.

Mrs. Clifford Yablonski, HOW DO I BRING UP THE PAPER CLIP TO TELL ME WHAT TO TYPE HERE?]
[Insert Mailing AddresSHUT UP I WILL BREAK YOU]
[InseIWILLINSERT MY FOOT IN YOUR ASS PAPER CLIP] 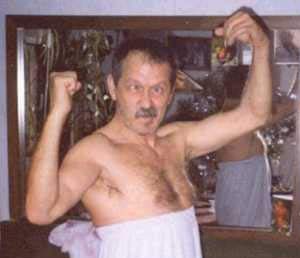 I would suggest doing what he says. My knee still hasn't fully recovered from my last encounter with the wonderful and erudite Mr. Yablonski. He is great and so is his web site!

Oh no, an all new Fireman Comic!!!

What an exciting development in the wonderful world of Fireman Comics! I just wish I could hire Fireman Sniper to take care of this throbbing headache I've been having.