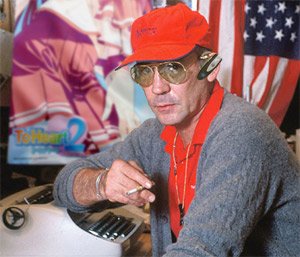 I'm up to my elbow in a Sam's Club mega bag of Flamin' Hot Cheetos when the phone rings in the bathroom. Another one of those fucking Nipponese gewgaws from ThinkGeek that costs too much but I can post a blog while I'm taking a shower.

I fish it out of the toilet tank. I don't have 30 meters of water, so I'm storing it there to see if it gives out. Part of the process for my guest reviewer spot on that kingdom of whores and bearded menchildren called Slashdot.

My editor says he wants me in Vegas by sundown to cover Spike TV's 2007 Video Game Awards. I have a raid to bring down Kalecgos with FoFP (Fist of Freak Power), but I am just juiced enough on Bawls to say yes. I can apologize to my guild when I get back.

I pop a double hit of Wellbutrin to take the edge off and wash it down with half a pint of Americone Dream and three lines of crushed SSRIs. I blaze a trail to Priceline and score a flight on Southwest for under two bills. I'll mark it up to three when I expense the fucker out to my dead-eyed sow of an editor.

Before I leave I text my attorney and request advice for my trip into the land of harlots, scorpions, and red-faced tourists. He calls me back while I'm loading both seasons of Tom Goes to the Mayor on my iPhone.

"As your attorney, I advise you to rent a hybrid that gets over 40 city miles. And you'll need some mangas. I can send you the PDFs of Full Metal Panic. You will need one pair of jeans and five different ironic t-shirts."

447 goes wheels-up from LAX only fifteen minutes behind schedule. The stewardess keeps telling me to turn off my PSP even though I have explained to her that it isn't a phone.

Touchdown in Vegas. The heat is like atmospheric influenza. I'm dumping sweat down the front and back of my communist party shirt. The one from Threadless with Karl Marx throwing devil horns. Hilarious shit.

I wanted a Prius, I get a Nissan Versa. I don't even know what that is, but the leather seats are hot enough to scald the tits off a panther. While I'm waiting for the AC to kick in I fire off a post complaining about it on my blog.

"The careless kiddy-fiddlers at Budget park their cars in the sun in VEGAS. Seats hot as magma burning through my utility pant. Getting ready to see Samuel L. Jackson and Spike VGA. If you think Budget sucks digg this."

Then I submit it to digg myself because you can never trust the whim of the idiot masses.

It's eight blocks from the airport to my hotel. I don't like driving in parking garages so I let a valet take it from me. I tip him a Canadian quarter. He looks pissed so I remind him that Canadian money is now actually worth more than US money now. He doesn't seem impressed. Idiot.

I register as Super Mario, as usual, but after the brainless little split tail at the desk runs my Visa she addresses me as Mr. Thompson. My chortle dies in my throat. I spy a couple channers I know from OtakuCon, but I don't say anything. The Wellbutrin is starting to wear off and I can feel the black fingernails of a bad case of social anxiety starting to rip into my flesh. I think I've got the fear.

I hurry to my king size economy bundle package Priceline Negotiator hell box before I start to feel queasy. There I sit as the night sweeps over Las Vegas.

Floors below my feet the crowd roars to the excitement of the latest Madden game. All the Wellbutrin and Zyban, all the regulators and norepinephrine in the world, none of it would be enough to lift me from my spot in front of the TV. I am paralyzed by the fear.

Strange memories are made on this nervous night in Las Vegas. A feeling is in the air, something different, as each of us writing for blogs or broadsheets or tabloid styles or just an old zine coming 50 at a time out of an old dot matrix just for authenticity's sake. The guys from Joystiq and Kotaku, Gamespy and Gamespot, each of us in our rooms. Alone, live blogging to a universe of people alone, each of them reading our reports of an event we're not even really attending.

It's happening ten floors below our feet and we're watching it on live broadcast from a satellite in space. It's what we are, right now, at this moment.

If you listen with the right ears you can actually hear the crack as the icebergs splinter and drift in 6 billion different directions, bumping and reforming into a million pixilated shapes like - holy shit, Bioshock just won game of the year! Holy fucking shit, the Spike TV awards actually have some integrity after all!

This is amazing! Big night for Ken Levine and the Bioshock boys at 2K. I just assumed this would go to Halo 3 and those money-sucking cardboard corporatists at Microsuck. I am so glad to see Spike TV finally acknowledge real innovation in gaming. Kudos to them.

I hit send on my email to my editor and lay back in the bed. This turn of events has been so exciting I can almost feel the fear slipping away. I briefly entertain the idea of playing some blackjack, but I'm not sure I know all of the terminology perfectly so I'm nervous about playing. I think I would be very good at it, because my Asperger's allows me to focus in on that sort of thing and be excellent at that, but it's also a curse because it makes me complain and be nervous in social situations.

Instead I decide to order up a couple bottles of Bawls and a pint of Americone Dream. Adult Swim just came on and I need to decompress.