Fucking shit. I guess I missed it. I had to kind of beg my mom and all of the relatives that were at my house to let me go to this thing for a few hours, and as I finally showed up around 5:30 there were only a handful of people left, and they were all packing up their car with the old signs and stuff. By the time I got back, my mother had already passed and everyone had left her deathbed. Didn't even get to say goodbye. Scientology will pay for this. 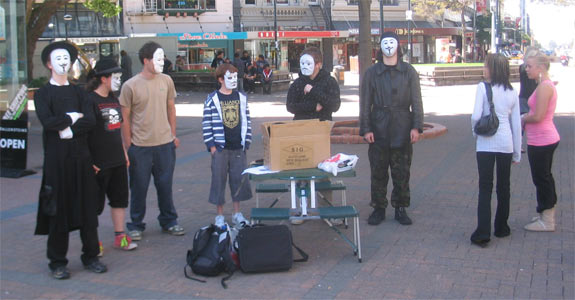 Anyone else taking part?

The bus driver refused to let me in because my Longcat banner was supposedly "too long". Possible scientology ploy? Wrote down driver's name, will look it up in database of known scifags later.

ScootsMagoosLady Says:
wehat a rush... youll have to excuse my typing; ive been doing laps of the back yard to throw off any scientology spies that might be tailing me... lulzdemon69 here, back from my "raid", no, not in the green fields of the world of warcraft, but in the outside world. by +now im sure youve heasrd of Project CHanology through one of several local tv reports and the column in the bloomington indiana tribune. im one of the soldieers in this war. front line. battle scarred. it was freakin epic. (epic win? maypahs,)

the day started after id finished my mcdonalds breakfast. itsd not really breaking my diet because if you look at the nutritional information its quite modest. anywaym, i had this idea for a cool ass sign, i sketched out the outline of a kickin sace alien and wrote "epic fail" next to it. well, i wrote it in outline, but then my fuckin crayon snapped. i figured it wouldnt matter as polenty of others would have signs. so i donned my peter griffin (XD) mask and headed down to the heart of hte beast...

tehre was some stupid scileno bitchass trying to "debate" with my brotheres. unfortanately they dont have my smarts so they werent getting anywhere. she asked them if theyd read dianetics and they fell silent. i didnt. i barked "chocolate rain" in her face, and she did this weird expression with her eyebrows. im sure she was attempting to fire a tone 40 mind beam at me so i ran as fast as i could in accordance with the rules of engagement.

ppl were honking their horns as i ran and yelling "retard" but it was directed at the others, im sure of it. hopped in my scion and headed down the freeway, saw this car behind me.. pretty obvious waht was up. signalled to turn and didnt, and they did. fucking faked out motherfucker. memories of nba jam came flooding back to me. scientologu just got owned.

"It's okay. We'll get you to a doctor! You're going to be okay," says a muffled voice coming from behind the smirking Guy Fawkes mask, as he rips open my shirt, examining my wound. I know it's not true, though. My life has been flipped, turned upside down.

“Not this time, I’m afraid.” I smile weakly, before I realize he cannot see it behind my mask. “It’s over. My life’s been closed due to AIDS. I’m just another deadfag.” I lay my head back against the concrete and stare at the sky, and in the bright light of the sun, I see the face of God-chan framed by red hair, and that soothing familiar voice telling me that he is never going to give me up. There is no pain. I know that the most epic lulz are yet to come. “With my dying breath,” I say, “I cast the gay on Scientology.” Longcat—who is long--does a barrel roll, forever. Desu. Desu. I look up at my kingdom. I am finally there.

J-Bird Says:
How many senior citizens did you guys get in other places? Here, we were directly across the street from a VFW hall, and they let the old guys out at around 1 in the afternoon. A band of maybe 30 of them came over, all with their little badge hats on, and got pissy because as they put it, "Science got us to the moon!" Turns out that they just didn't. Fucking. Get it. Luckily, we gave them copies of about 8-10 different fliers that had drawings of hentai on them, which placated the old men.Ingwit Says:
Hello innocents. Wolf Cutter (aka Xerxes Null aka The Trim Reaper aka He Who Turns The Wheel aka Death's Head Ross) here. Freshly returned from my sojourn into the feverpit of Project Chanology and I bet you're all awonder how it went. I could say "tune into the newsfeed wastebrain" but we all know it's best to hear it straight from the enforcer's mouth. Ah my little lamblings, how you tremble in your exurban wombs, your panties already moist with a single tangy bead of anticipatory piss. Don't worry. The Wolf's here. The Wolf's got the stiff dope to twist your tenders, no doubt.

10 AM I wake up in my car. Why there you ask? Because I live there, natch. If your house can roll you're good to go, that's my motto. One of thousands anyway. Don't believe me? Check em out. The PDF's on my blog, fuckfreckle. First thing's first I shoot some black tar straight into the dorsal vein of my penis. That's your big one for those of you not in the know. Do it there and the shit'll hit your system harder than Popeye layin into Olive Oyl after brownbagging a Mad Dog. Told her twice already? Haha fuck, forearms like that, bitch ain't just gettin told, she gettin brokeface sermonized. Anyway when I say black tar I mean it. Darker than Wesley Snipes face down in a vat of shoe polish. Jolson Junk. Straight-up stupefying. I'm flying now, money well sent, kick out the door and swing along Central Ave, Converse not even touching the pavement cuz Wolf's doing the mostly ghostly strut baby, five inches of air tween me and Baba Urf. How do I know where to go? I follow the scent of sweatsocks and the sound of technicolor Nip tunes sung in the key of Geek, beautiful grease blossom on the near horizon. My eyes are trained: to me it looks like a mushroom cloud from some armpit Los Alamos.

The crowd's huge yeasty and pale, and for Wolf this is down among the dead men, the lambs of /B/tard Prime, the Killing Floor Chan Four. I'm getting looks from the honeys (stepdad rapecases with the too-tight bootys) and the gents (the less said the butter). Is it my wardrobe? All black cept for the Nintendo controller beltbuckle to draw the eyes, I call that the Batman Ruse. Nah it's because, honeychuckles, I'm the only one without a mask. It's not overconfidence. It's not foolishness. It's that I know we all wear masks every day of our lives. Why bother with one more? Besides, someone already took my 3 Ninjas idea.

He turns around, waves of nervousness peeling off him. "Hey buddy. Epic lulz detected in this base that are belong to us, right? Can I haz teh win, right? Knowledge is free, ri--" I let my Qdoba club card do the talking. The words come out of his mouth slower than the blood as the laminated edge severs his trachea. To seal the deal, a quick hard kick snaps his leg, hot salt copper and fat spraying my jeans and that's that, I send the poor cunt to Outer Space Valhalla or whatever it is his people believe in.

Panic is instantaneous. Frenzied press of bodies. The A-cup chickie is gone, would've liked to bend her over a Barnes + Noble bargain table and make her scream with my cream but no time now. The 5-0 are at my back.

Shots are fired, dearie me. Course what the cop-tops don't know is that I've read the Annals of the Eight Chinese Immortals. I've tasted of the cinnabar. Mother of pearl has caressed my tongue, mothertruckers. What does that mean? Means bullets don't mean Donald Dick to me, might as well be spittin jujubes for all the harm it does. "Sorry officers," I say, "but it's not my habit to kill and tell. Toodle to the ooh," and then I'm flying, wire-fu in realtime, and there ain't nothing they can do but gawk and goggle, the fuzz, the chan squad, the sci guys, all of them.

And now I'm back here hunkered in the Bunker and tip-tapping this into the blogosphere for the general enjoyment of you my dew-eyed audience. Rest assured, more will be forthcoming as I once more into the fray with my fine and frenzied self. But until then, baby janes, this is Wolfie C. over and out.