Sorry Guys, But We're Going to Have to Send Back Those Flamethrowers 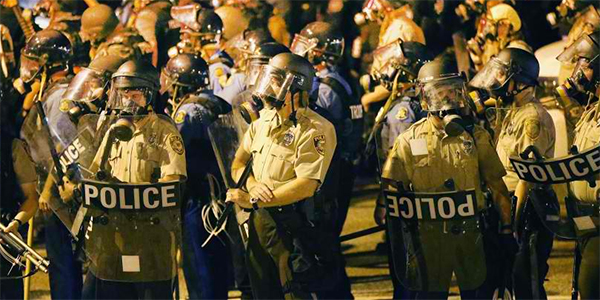 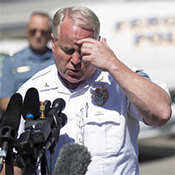 You know as well as I do that Army Crate Thursday was the number one reason to join the Ferguson police force. Every seven days, we'd receive an oversized wooden box from the military, full of specialized weapons engineered to help us protect our citizens from domestic terror. This program worked wonders, and allowed us to take advantage of the latest in crime-fighting technologies. Remember when Jenkins shot that phaser-looking thing at the dog that was barking too much? Turned that little fella into a cloud of green mist that still persists to this day. We still don't know what happened, but one thing is clear: It scared any possible terrorists well outside the city limits, where we no longer have to deal with them.

Well, thanks to the actions of a certain officer -- nice one, Darren -- our fun is going to be temporarily spoiled. It seems the citizens have begun to see us as tyrants, and while I'd like nothing more than to crush them under the treads of our several tanks, it's important to remember those people pay our salaries. So, for the time being, we're going to have to appear more sensitive to the demands of the public until we can make it illegal to film us. That said, saying this hurts me just as much as it hurts you: Sorry guys, but we're going to have to send back those flamethrowers.

I know, I know. We had a lot of plans for those babies. Even if we couldn't legitimize their use on the streets, the flair they could have added to our annual picnics would have made up for it. I know Finnerty over there drew up a schematic where we could flash-roast 200 rotisserie chickens at once with just three of them. But now, we have no choice but to let Boston Market do the catering -- AGAIN -- and wonder what could have been. You all know through the several e-mails I sent about how much I wanted to go nuts with one of those things in our impound lot, and now I have to resort to my backup plan of firing countless rounds from a mini gun into unclaimed Tercels. It's not my ideal scenario, but we simply can't handle any more negative feedback about our abuse of power.

It was a tough choice, but I had to make it. You see, the media doesn't understand the importance of immediately crumpling to the ground the second you see a police officer out of the corner of your eye. We're easy to spook, after all, and most of us understand the unspeakable sexual pleasure that comes from hearing the death rattle croak out of some potential shoplifter. It's not something I'm proud of, but if that's how the human body works, so be it. Even so, I can't imagine the headlines if one of Ferguson's residents caught us blowing fiery death out of one of those things. We could inform them that flamethrowers actually give us shorter range, which makes us less of a threat to them, but god forbid these people understand simple logic. I mean, we're talking about a group that thinks this whole "hands up" gesture isn't a sign that they are, in fact, summoning additional criminals to the scene through what i understand is some kind of voodoo magic. I mean, that's what Darren told me, and he's one of us, so who am I to argue?

So, until further notice, I don't want to see you roasting marshmallow one. And I'm serious about this. Remember when Fogerty defied my orders and didn't run down those jaywalking teens who posed an extreme danger to the surrounding traffic? Six weeks of paid leave. And you know what he missed in those six weeks? I seem to recall a certain officer who was absent from over a month of dumping weaponized white phosphorus on stuff. Remember how cool that was? You really want that to happen to you? Okay, I've said my peace: Until further notice, no flamethrowers. Now all of you grab a death ray from that cardboard box and hit the streets. And remember to keep that safety off.