The world was under his control. More than fifteen cities are named after him. He changed the face of society and single handedly creating the Hellenistic era. He wore numerous names. We call him Alexander the Great, his name is a synonym for excellence in India, and Zeus called him son. Sometimes credited as the best military commander in history, a man with a wish to unite the human race, or a megalomaniac-all theories. Only one trait about this man is certain-his horse. But not any horse, Bucephalus was the strongest, most famous, and vicious horse in history. The animal's life is as legendary as its rider. Bucephalus was untamable, only Alexander could harness the fierce fire that burned inside the beast, and it only took five minutes before the man and beast were one. As the two united and crushed the known world, they were the perfect embodiment of the word "powerful." 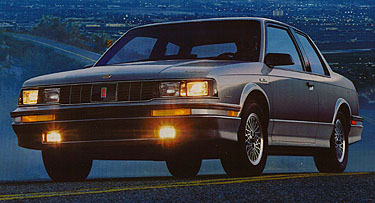 Can Drive in the Dark!Strangers often used the word "awkward" to describe my first ride and me. Alexander the Great and myself have numerous similarities, but mode of transportation was not one. When Alexander mounted his beast he was a symbol of power; I resembled Don Quixote. Bucephalus' Greek name means "ox-headed," which was the only flaw observed by the owner. Using the same logic I can assume "Cutlass Ciera" translates to "everything." It was my first car, purchased off a drug dealer for 1,000 dollars. But I had no knowledge of the car's history because the drug dealer's father, who seemed like a kind man, was selling the car. A problem I would later discover was that his son was not ready for the sale, but I assume communication is difficult from jail.

As I tested the engine it gave the powerful roar of pure V6 gas guzzling. The car was crafted out of a solid piece of steel. I've read accounts of a sculptor who spent his life during the 1970's and 80's carving these automobiles out of complete blocks. The car was amazingly strong. I never wore a seatbelt for two reasons: 1) They didn't work. 2) I knew there was no need, because whatever I ran into would be instantly obliterated in an explosion fit for a thirteen part miniseries hosted by Carl Sagan.

Prior to buying the vehicle, I took it to a local auto shop to see if it was a smart purchase. The technician said, "the engine is perfect" and "that it would run forever." He was absolutely right. Unfortunately he failed to mention that everything else was long past expiration.

Not everything was untrustworthy about the automobile from step one. It did featured countless bonus accessories. A contest between the Cutlass and any other used car would leave the competition humiliated when compared in luxury and enjoyment this vehicle could give me. I fell in love with the features every sixteen-year-old would enjoy; brand new CD player, power everything, huge speakers, a brand new rear windshield, and an awesome bench front seat. Considering the car was only one year older than I, with one previous owner, and had only traveled a petite 80,000 miles, I thought it was a good car. I don't want to sound as though everything was perfect in the beginning, as I idled down the street for my test drive there was some rattling, the ceiling looked awkwardly hung, the paint was flaking like an antique plate, and the color was the aftermath of some bizarre experiment by Oldsmobile to mix both brown and purple together.

Not many people my age realize the prestige of the Cutlass Ciera: it was a luxury automobile, one of the finest cars of the time, and I've seen people with my same model displaying antique car plates. As a child, I was always infatuated with the idle class in movies, slowly driving down the winding cliff-side roads of California, wearing their lavish outfits. I wanted to live in a Fitzgerald novel. If I bought the car I decided that a pair of driving gloves was a necessity for the sake of maintaining class. I had just received my license, my family was pushing me to purchase a car, and I was infatuated with the distinction it had from the Civics my peers were given, so I wrote a check.