An Eternity Later, I Regret Shopping at Forever 21

A long time ago, forever to be exact, I shopped at Forever 21. I meant to just drop off some headshots in hopes of becoming a model on their website, but I ended up buying something: a t-shirt featuring the iconic cover photo of the Notorious B.I.G.'s debut album, Ready to Die. I hoped that the shirt would give me a bad boy image that would land me more modeling gigs, or at least make people stop laughing at me when I practiced my catwalk strut in public. Little did I know that this seemingly ordinary garment from Forever 21 would change my life forever. 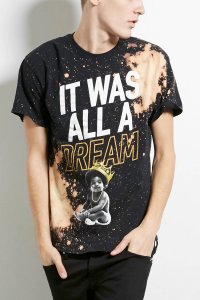 I remember the day clearly. It was February 1st, 2021 (2/1/21) and I was 21 years old. As I tried on my t-shirt featuring the cover photo of Ready to Die (which the Notorious B.I.G. began recording at age 21) in front of my oversized dressing mirror, I thought about how great it felt to be a 21-year-old in the 21st year of the 21st century. "Wouldn't it be great," I thought, "if this shirt I bought at Forever 21 would make me 21 forever?" This was a fairly typical thought for me, as I always wished that products I bought would live up to their names. As a child, I'd wished that Lucky Charms would make me lucky, and that every Final Fantasy game would permanently satiate my desire for fantasy, making it the final fantasy I'd ever need.

Then something strange happened. As I struck a sultry pose in the mirror I was suddenly engulfed in a nimbus of white light, and an electric tingling spread from my chest to my extremities. Then a godlike voice of no particular gender boomed from the ceiling like the voice on a store intercom. It told me that as long as I wore this shirt, I would be 21 years old forever.

Despite this incredible occurrence, I was skeptical at first, so I gave a sample of my skin to a friend of mine at MIT's biology lab. He discovered that my cells had become identical to those of hydras - tiny freshwater animals that are biologically immortal - and also appeared to be indestructible. When placed in a petri dish of acid, my cells swam around in it like a pool and then proceeded to have a wet membrane contest.

I was overjoyed and invited my friend out for a drink. After the bar closed, I went to an MIT frat party, where my ability to consume lethal amounts of drugs and alcohol made me an instant hit with the other partygoers. The next morning I discovered that I'd become the star of a viral video where I drank an entire bottle of tequila, then dove out a third-story window into an empty swimming pool while someone shouted "Worldstar!" in the background.

Thus began an orgiastic binge of sex, drugs and partying that would last the next few centuries. My immortality made me the life of every party, and not just because I was the only one there whose cells weren't actively dying. I began partying with famous celebrities, including platinum-selling R&B singer Tub Boi, who was the first to notice when my shirt started to change.

One night, I think it was in the year 2398, Tub Boi and I were snorting death rocks off the chests of cyborg prostitutes on the roof of a speeding hovercar when he said, "Hey, no offense, but your shirt looks kind of weird."

He was right. My shirt, which had formerly shown Biggie Smalls as a cuddly afroed infant, now showed the rapper as a middle-aged man. His eyes were sunken and his face was creased from what looked like years of substance abuse. I realized that, like the portrait of Dorian Gray, my shirt had borne the consequences of my nonstop hedonism. From then on, I tried to wear another shirt over it whenever possible. 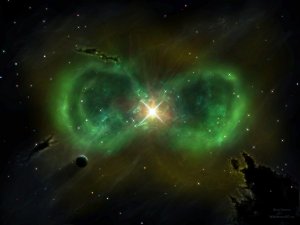 A few decades later, I got sick of partying. I had experienced every known pleasure on earth and even the Unknown Pleasures alluded to by Joy Division, one of which turned out to be a type of ultra-potent cocaine. (It can be seen on the cover of the band's debut album as a row of white lines that most people mistook at the time for a mysterious computer-generated graph.) Watching my friends grow old and die over and over again was getting depressing, and I was tired of having to change my identity every few decades, lest I end up in a government laboratory where scientists would perform a battery of painful and humiliating tests to determine the source of my eternal youth. I finally realized that living forever wasn't for me after all and decided to take off the shirt and become mortal again. That was when I made my horrible discovery: it wouldn't come off. The fabric had somehow fused to my chest and was impossible to remove.

"Oh, by the way," the godlike voice I'd heard when I'd first put on the shirt said, "did I mention that you have to wear the shirt FOREVER?"

I was distraught, but after a few days of weeping I composed myself and calmly and rationally began to attempt suicide. I tried killing myself with guns, bombs and even love, which I'd heard somewhere was stronger than bombs. Nothing worked. My lithe, sexy, perpetually young body had become my prison cell.

Eventually the nuclear war came. Or maybe the sun burned out, I forget which. Suffice to say, the earth became a barren, freezing rock of which I was the last inhabitant. Fast forward an eternity and the universe has reached a state of total entropy consisting only of homogeneous subatomic particles colliding randomly with each other.

I'm alone here. I float in this empty expanse with no friends to text, no cheap liquor to drink, no youthy, radio-friendly party anthems to dance to. I will remain here for all eternity, regretting my infernal bargain with the retail Mephistopheles of Forever 21, which has interned my soul in this accursed t-shirt.

At least the shirt is black, though. The only thing worse than being trapped in a featureless void is having nothing that matches it.