At first, the ring was small-a few games of jacks for a quarter or a dollar for whoever won at foursquare-but it didn't take long for Bert's business to take off. Soon he was making up to five dollars a week, and the money went straight to his head. Interviews of former members remember him arriving to school on a new Schwinn every quarter and buying the entire class a cola on Fridays. But the money didn't satiate his thirst for power, it only made it worse. Though he was a master at organization and manipulation, it was the chance meeting with Mikey "The Animal" Merroni that allowed the Playground Posse to rise. 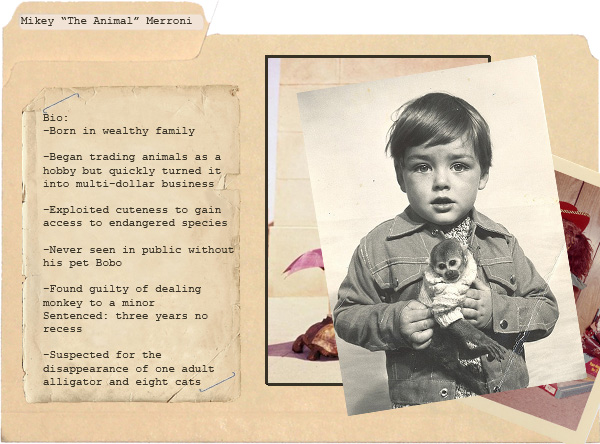 Mikey and Bert came from different sides of the train tracks. While Bert was trying to fit into one of his nine brother's old shoes, Mikey was buying new shoes for the horses in his stable, but the lust for money brought them together. Mikey's influence on the Playground Posse was immediate. Before spring break, the illegal trade had been established. Contraband flooded the lockers. At any time in the day, a student could get an ice cream sandwich. Mikey's specialty was exotic animals that he would sell for up to ten dollars or "favors." One girl is reportited of giving him "over fifteen" kisses on the cheek for a baby koala.

Though the girl was later clawed to death by the animal, no one blamed the Playground Posse because of the intense mental and physical fear that ran unchecked. Most of the fear was because of the gang's enforcer: Phil the Fist.