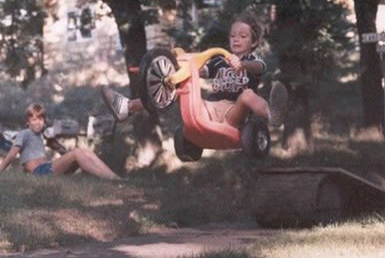 Last photograph taken of Billy before the accident during BigWheelBigDeal. July, 1985.In the early days of the gang, new members joined not for money or power, but as a way to be socially accepted. Luke’s brain damage (suffered in an infantile tumble into a hydraulic dam) allowed him to build ramps, some rumored to be as high as four bricks, and jump them on his big wheel without breaking a sweat. His impression on the neighborhood was immediate. By July of 84, two months after acquiring the toy, nearly every child had begun dying their hair blond and speaking out against girls in an effort to imitate their idol. During spring break, the members would throw BigWheelBigDeal, a three day celebration in which new recruits must reenact famous tricks of the leader, often resulting in disaster. By being both a boss and an idol, Luke was able to keep the gang in line through exploiting his followers’ admiration. Because of the unquestionable loyalty found within the members, the gang was notorious for its open door policy in accepting new recruits.

1. Must have a big wheel. As the central means of transportation and movement of illegal contraband, the big wheel was a necessary tool for every member

2. Must be cute. In case of being caught, a cute smile and chubby cheeks allowed for a lesser punishment.

3. Must not be a girl. Girls, according to Luke, were “Wastoids” and “Untrustworthy to the millionbillionith degree.”

The constantly expanding and shifting structure made it difficult for parents to know who exactly to ground, allowing for children to participate in countless activities while avoiding any type of punishment. The lax enforcement of rules allowed the gang to grow for months completely unchecked. The exact number of members is unknown, but based on pictures alone, most estimates are in the multi-dozens. 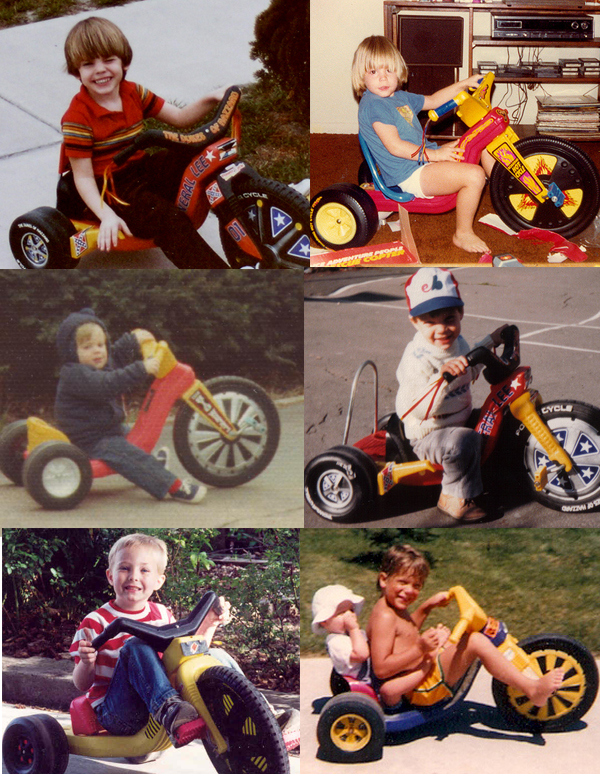 Though the gang members were not allowed to cross the street, they ran their block with complete control. Children were unable to play outside without paying for protection—often in the form of fruit snacks. Anyone caught breaking the rule was met with harsh retribution. If protection wasn’t paid, then there was no guarantee that a child’s sidewalk chalk drawing would be around the next day. The most terrifying threat came in the form of a “watering,” an attack where as many as ten Rollers would ride by and throw water balloons at a target before driving off. Targets would often be warned a few days in advance by a dismembered body of a GI Joe found by the front door. For the next week, the target would live in complete anxiety over when and where they were to be soaked. Soon the sound of hollow plastic on pavement made every innocent child sweat. As enforcement grew, so did the crimes. As seen in the last photograph, the Reno Rollers quickly began trafficking younger girls to beg for change on the corners. Using their good looks, many members acted as babysitters, providing the gang with a continuous stream of beggars.