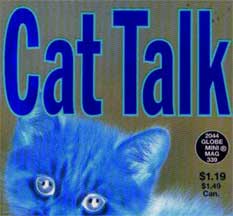 CLEO CAN SEE INTO YOUR SOUL.

Those who may have inadvertently read Tuesday's update might recall that I wrote something about cats and something else. To be honest, I don't even read my own updates, as it depresses me to realize I'm a grown man writing about cat books found in gas station checkout stands. However, I've got this tiny book in front of me entitled "Cat Talk," so I'm guessing that I reviewed the first few chapters from this award-winning novelette (I just made up "The Award For the Best Cat Talk Book Named 'Cat Talk' Ever" category and it was the sole nomination). It is now Thursday, roughly two days after I began the long and arduous journey into cat lover Suzanne Smither's world of cat relationships, and I feel as if the book has failed to help me forge a more intimate, emotional bond with my two cats, Stupid and Cat. Despite the help of cat lover Suzanne Smither and her equally helpful, loving cats Cleo, Faith, and Hope, I still lack whatever mental conditioning and fortitude is necessary to truly communicate with these two creatures who lick each others' anuses on a regular basis. Perhaps Smither was simply holding out until chapter three in order to the create complex character development and a thick sense of plot tension needed to fuel such a novel? We'll find out today in the thrilling conclusion to part one of whatever the name of the previous update was labeled!

I had a keen sense of where this book was heading before I even began the first paragraph. For example, I knew it would be about adoptions and rescues. I also safely assumed that cat lover Suzanne Smither would babble on for paragraphs about the spiritual metaphors behind her pets' names and how we should all wear purple colored crystals when we waddle into the nearest grocery store to refuel our insatiable Cheeto and Mountain Dew supply stash. I'm no stranger to the adoption and rescue scene; why, my own parents adopted me at the young age of 19. Shortly after adoption, I fell into a nearby well and was stuck there for the next three years. The fire department claimed they couldn't retrieve me from the well because the weather was "really bad" during a majority of those three years, so I was home schooled there until I was rescued at the age of 22. One magnificent day in June, a kind-hearted jolly fellow stopped his car and rolled me out of the seemingly bottomless well which had imprisoned me for so long! It turns out I hadn't actually been in a well for the last three years, but I was instead very drunk the night before and passed out in a drainage ditch behind the Applebee's. It just felt like three years because when you're closer to the Earth's core like I was, time seems to slow down like a whole lot.

In addition, both Cat and Stupid have been rescued by myself when they found themselves at the cold, concrete hand of The State Animal Really Mean Adoption Agency. I like to pretend I arrived mere seconds away from their respective lethal injections, like the governor calling the state penitentiary at the last moment and granting a stay of execution to a prisoner who was falsely framed for repeatedly shitting into a bunch of newspaper shreddings. Then I like to pretend I wasn't called "Pubeasaurus Rex" in high school. Cat lover Suzanne Smither apparently enjoyed pretending as if she's not nuts in this chapter, although she quickly drops this facade faster than a bowling ball thrown off the Eiffel Tower. Purebreed kittens, according to this distinguished literally scholar, may cost "from a hundred to thousands of dollars," although she supports this notion by claiming "it's a worthwhile investment." Lady, unless my adopted cat vomits gold, it's not a good "investment." Stocks are an investment. Savings accounts are investments. Rare coins are investments. Cats are only consider "investments" to Korean restaurants. Luckily, cat lover Suzanne Smither's detachment from reality becomes more pronounced as she decides to let her cat Cleo take over writing the book at this point. And oh boy does he / she / it ever take over.

"We're very bright, so please take time to join us in some challenging games." 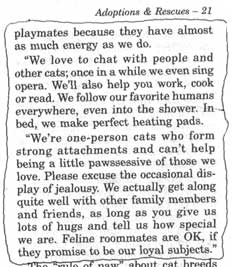 Yes, thank you very much for the advice, Cleo! I'll head out and buy a goddamn Scrabble board right now so I can try to kick my cats' asses with triple word scores! I'm no expert in cat loving like cat lover Suzanne Smither is, but I'm going to head out on a limb here and claim that she shouldn't allow Cleo to write any future novels. If that previous nugget of advice didn't tip you off, try this on for size: "we love to chat with people and other cats; once in a while we even sing opera." Damn you Cleo! I had been patiently waiting the entire book to read about how I could communicate with my cats, then you suddenly give me the literary bum's rush and start detailing how cats like you are able to casually converse with humans like me, even going so far as to claim you've got the vocal cords of a 400-pound German woman! I don't know about you, but if I were to ever see a cat singing opera in public, I would open fire on it and drive off at a very high velocity. Chances are it's either a ghost here to haunt you or somebody dressed up as a ghost here to haunt you so you'll eventually get so scared you'll sell your plot of land to him and he'll build a large factory that produces plastic Easter candy eggs there. Cleo hands the book writing duty back over to cat lover Suzanne Smither on page 23, and she picks up where he left off:

"Even though she's now a middle-aged lady, Cleo has never outgrown her kittenish habit of kneading, although she gradually stopped suckling my neck." (bold print added for emphasis)

I'd like you to please read that sentence again. Do it in slow motion, as if you're trapped in a crappy Matrix-ripoff produced by Dino De Laurentiis. Once you're finished, you'll have undoubtedly realized that not only is Cleo now a female human who is middle-aged, but she used to SUCK ON CAT LOVER SUZANNE SMITHER'S NECK. I assume cat lover Suzanne Smither allowed Cleo to constantly do so, unless cat lover Suzanne Smither is one of those new age people who get so morbidly obese that their arms are reduced to the functionality of a Tyrannosaurus Rex. Hahaha, he had those dorky little arms that didn't do anything. What a jerk dinosaur. If cat lover Suzanne Smither does indeed suffer from Tyrannosaurus Syndrome, then she probably lacked to ability to swat away Cleo and prevent her jugular from becoming a pacifier for her worthwhile investment. The question on my mind here is regarding how Cleo was able to chat with people while singing opera and leeching onto her owner's bulbous neck? Are purebreeds capable of warping the space / time continuum? If so, I think we'll need some more of those photon torpedoes that the ship from "Star Trek" used to shoot at everything once Captain Kirk realized that shooting it with the laser beam was doing jack shit. Just to spite cat lover Suzanne Smither, I skipped the next 10 pages and went to the next section penned by her feline buddy Cleo:

"Cleo adds this pussyfootnote: 'Say what you will, when a cat decides to adopt you, you're adopted. The many ways in which it happens only go to show what purrsuasive, purrsistent beasties we are'." 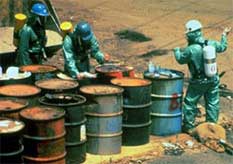 This is not really a cat-friendly environment. I mean, the barrels are great and everything, but cats just hate those guys in the suits.

If you're adopting a cat, you should probably live in a "cat friendly environment," which basically means "a house that does not have lava or spikes instead of a floor." Cat-unfriendly environments include active minefields, demilitarized zones, the bottom of the ocean, and hell. This entire chapter is written by cat lover Suzanne Smither's various insane cats, detailing how you can go out of your way and possibly become bankrupt in a futile pursuit to please your pet. World-famous literary master Hope goes into painful detail, taking roughly 500 million pages, simply to explain the central message that "cats like to eat food which cats like to eat." If you try to feed your cat a brick and he doesn't like it, then don't feed him any more bricks. If you give him a dead bird and he eats it, then provide him with dead birds which were killed by bricks. Hope even goes so far as to provide various recipes for cats which include buying and preparing fresh shrimp. I "hope" my cats don't plan on eating any fancy shit like that! Ha ha! That's a little joke at the expense of a crazy woman's cat's name, thanks for playing along! Please pray that cat lover Suzanne Smither does not read that and unleash the power of her crystals on my soul.

Next up; interior decorating for your cat. I'm not kidding.

"Colors don't matter as much, but given a choice, we'd prefer the violets, blues and greens at the cool end of the spectrum, which is most visible to us."

I'll be sure to rip out my carpet and redecorate next time Hope comes over to piss on my floor. I know it doesn't really matter to me what color the floor is when I'm urinating upon it, but God only knows how I'd hate to offend Cleo.

CHAPTER 5: BONDING WITH YOUR CAT

Finally! What I had been waiting for! Cursed hellspawn cat lover Suzanne Smither waited for five chapters until she decided to bestow the keys to cat bondage upon me! I was able to tell this would be one hell of a cosmic joyride as soon as I read the first sentence of the chapter: