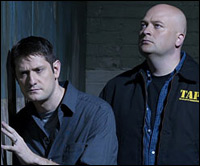 The paranormal investigators on the Sci-Fi Channel's series Ghost Hunters stress that they are skeptics, men and women of science who set out to disprove hauntings, unlike their unscrupulous competition.

Take, for instance, the observational skills employed as they point at "shadowy masses" which always appear wherever the film crew isn't looking and outside the range of the 6+ stationary cameras deployed in every case. Consider the custom-made contraptions which light up when ghosts pass by, and certainly not when manipulated by the user or poorly calibrated. Note how they isolate Electronic Voice Phenomena, segments of audio in which spooky voices respond to the investigators' questions, often accompanied by background noise levels that are jarringly different from the rest of the recording.

Unfortunately, Ghost Hunters has come under scrutiny following last year's live Halloween investigation in which a ghost viciously pulled Grant Wilson backwards three times, causing the investigator's collar to move slightly downward while his hand fiddled with something in his right pocket.

Some people claimed this was a hoax, that Grant was simply pulling a thread connected to his collar. (Never mind the obvious possibility that the ghost pushed his hand downward to tug on the thread connected to the collar.) Empowered by this perceived trickery, thousands of conspiracy theorists have taken to picking apart every episode.

These are the most popular pieces of "evidence" circulating the internet that suggest the show is less skeptical in nature than it claims to be.