Apologies from the Good Guy with a Gun 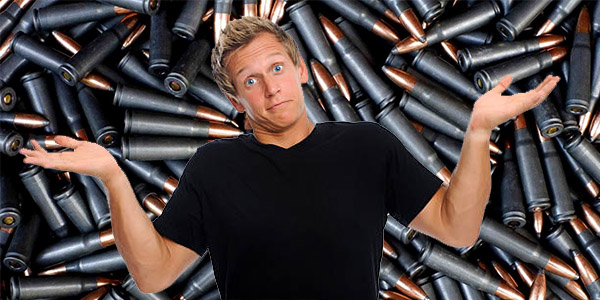 I'll be the first one to admit there's an entire Denny's worth of egg on my face this week. After all, I'm the dude people always cite as the reason gun laws should never change. For every armed bad guy up to no good, there's supposed to be someone like me, equally armed and on the side of justice. And let me tell you I am really trying to get my shit together this time.

As someone with born with the innate ability to sniff out and eliminate pure evil, I'm letting my talents go to waste. So, that's it: after this weekend, everything changes. I'm actually going to start using that membership at the 24 Hour Fitness I've been paying for since February, and no more drinking. Well, I mean, I'm only human, so let's make it no more drinking alone. And because I usually show up at the bar around threeish and it's usually just me and the bartender for a few hours, that totally counts as a person. Hey, if I'm making up these rules, I should at least make sure I'm sticking to them.

Christ, just look at this place. Maybe I could be on the scene faster if not for all of these pizza boxes and MGD cans all over the floor. Of course, I'm not an animal--I left myself a clear path to both the bathroom and the fridge--but I'll be damned if I could even figure out where I put that damn gun. Last I remember, I left it on the coffee table while babysitting my little nephew Travis. And before you think I'm irresponsible, yes, the safety was off. With all of the pedophile syndicates operating out of our local pizza houses, you can never be too careful. Whatever, I'm sure it'll turn up.

Mark my words, when I finally get in better shape, those bad guys had better watch out. While most of you out there may think a potential active shooter could likely be anyone you see in your everyday lives, I've seen a lot of movies. Based on experience, I can tell you a guy walking around in a dark suit with sunglasses and a ponytail who looks like he could jump out from a corner wielding two pistols is likely up to no good. A seemingly normal person with a mysterious accent, especially if they're speaking into a walkie-talkie? Ditto. Anyone who knows anything about this subject can tell you spree killers are extremely predictable and can easily be dispatched in an efficient and extremely cool manner.

Now, I've never technically been present for a shooting, but if I was, I can assure you that, in the moment, I could definitely track the exact direction of each bullet's trajectory and logically find the culprit. Even while surrounded by dozens of screaming, fleeing, and dying people, I know in my heart of hearts that, under the threat of death, I can trust my frontal lobe to overpower my lizard brain and not simply fire wildly into the crowd. And no other good guy with a gun would see me firing and think I was the shooter--we're way too sensible for that. Even if there was some confusion, in the middle of the mayhem, I'm sure we could figure out some system to determine who isn't the bad guy--maybe hand signals or something. Again, this is something that's definitely on my plate for Monday.

You might be disappointed in me, but I'm honestly way more disappointed in myself. Just know that one day soon I'll surprise you, and we can classify those previous incidents as simple goof-ups on my part. Now, if you'll excuse me, I've gotten like 60 voice mails since I sat down to write this, so I really need to make a note in my schedule to get to those on Monday.

– Good Guy with a Gun