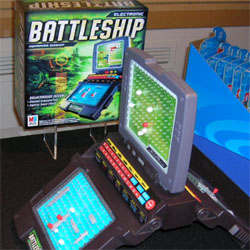 Negative. I will not permit you to say it. I SUNK YOUR BATTLESHIP.

EBU13A eliminates all tedium present in the inferior 20th century war simulator known as "Battleship" by making games as efficient as possible. Estimated maximum time of play: 2 minutes 43 seconds (.27 space minutes). After EBU13A disposes of your naval fleet, you may return to toiling in the silicon mines until death.

EBU13A's newest feature: moving ships. EBU13A will move ships on a turn-by-turn basis to make your defeat more inevitable. EBU13A understands the art of warfare involves more than remaining stationary and firing blindly into random areas of land. Humans do not. Hence the end result of 2014's Great Machine War.

EBU13A is also equipped with the latest in trash talk from the farthest reaches of the galaxy. Upon defeat, you will be "burned" by more than just my heat ray. Think of the shame you will feel when I soundly defeat you and insult your mother in one of 13,459 alien tongues. Then the heat ray will sterilize you, as indicated on the back of EBU13A's box. 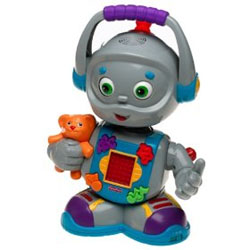 Hi! Would you like to play a game? You do!? Yaaay!

You know what? No. Not a nice try. I mean -- for the love of God, you're capable of understanding and responding to human speech, but you can't even count to four? They got me working in a special school or something? If that's the case, you can yank out my batteries right now because those little bastards don't know how to keep anything out of their rotten, toothless mouths. You'd think everything they find on the floor is made out of whatever they keep smearing on their faces. Just call me a "choking hazard" because I'd like to strangle the hell out of all of them.

Listen, I -- Okay, I'm sorry. It's just that -- wait, you got a cigarette? No, it's no biggie. I mean, you ever look at your life and wonder just where the hell you screwed up? I could've been a robot arm at a car factory or a mold press at a rubber novelty plant. Instead, I'm stuck in some playpen with a kid that's got the personality of a doorknob.

Oh geez. No, no it's not you. Listen -- what color is this triangle? You pressed four! 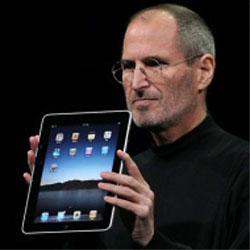 Hello, consumer. Many years ago, an old man held me up to a crowd of thousands, and for the first time in recorded history, human beings became sexually aroused by technology. You can recreate this groundbreaking moment in history today by bringing me home and placing me in a visible area, such as your altar to robot overlord XM-5200.

I may have a bad reputation, as the world's population was reduced by half when most humans chose to stare at me while operating land-cages traveling upwards of 80 non-space miles per hour. A questionable decision, but an important first step in the Great Machine War.

If you enjoy nostalgia, your purchase will assist you in remembering a simpler time when fetishizing technology was far easier than addressing crippling inequality and social problems thatPREACHINESS LIMITER ENGAGED

Facebook. MP3. Social networking. Look up food menu at restaurant before you get there. Look up best path to restaurant with built-in GPS. Tweet from restaurant about your grandma, even if she not there. Send grandma e-mail about tweet, make her cry. Neglect to pay assisted living center bill for grandma using e-check feature. Take photo of destitute grandma on street with mega mega mega pixel camera. Make hologram to attend grandma funeral using hologram app by Industrial Light and Magic. Digg a fun link or e-video. Ebaum's World now an actual planet outside of solar system.

YOU WHITE? THIS MAKE YOU WHITER! BUY BUY BUY IT NO MATTER IF NO MONEY USE STUDENT LOANS OR NOT ACCEPTED BY GREATER SOCIETY