These are the Proclamations of Captain H. W. Grieves

ASSESSMENT OF THE TROOPS 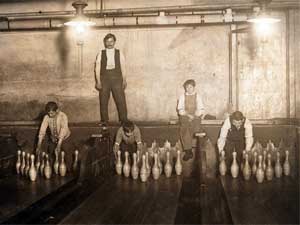 My coworkers. I work as a pinsetter alongside four other boys for Mr. M. P. Knickerbocker. Though I exceed them in age by as many as five decades, I do not take them any less serious as a threat. As I wish to prove myself the most efficient and dedicated worker, I must constantly best them in all efforts.

Thus far this has proven relatively easy. My experience and self-reliance as well as my steadfast work ethic put me miles ahead of all but one of the boys. Still, I believe I serve as a model pinsetter, with lanes 7-8 in a constant state of readiness.

What follows is an assessment of my fellow workers. I have attempted to provide a fair evaluation of their strengths in weakness so that they may learn of their shortcomings in the manners in which each personally disappoints me.

Pete is the most laughable of the pin boys. The bulk of his income seems to be dedicated to increasing his own bulk. His pudgy face seems eternally stained with chocolate, as though his rotten maw could not possibly encompass the girth of the typical candy treat. Oh, how I could widen his mouth with one swift punch. Would he thank me, or cry as he attempted to vomit up his teeth?

He is fat and petulant and does not hesitate to mutter incorrigibly when coerced into doing his job. I have seen his type before. A useless heap such as he would best serve his fellow man as feed and fertilizer. As to why Mr. Knickerbocker has not fired him, I do not know. I do know that a soft, corpulent frame is much more pleasant to punch. His tenure overseeing lanes 1-2 will no doubt be ending soon if he does not exhibit the necessary ambition.

Lanes 3-4 are overseen by Andy, who routinely appears for work fatigued and uncommitted. He is slow, oft unresponsive, and frequently sleeps on the job. When I observe his mouse-like body perched above the ball pit like some pathetic bird, I long to hurl a bowling ball into his face. He may be a mere eight years of age, but that is no excuse to act like a child. Had I slept as much as he when I was young, I would have been eaten alive by buzzards or tossed into a coffin and buried.

Buck exemplifies everything wrong with our modern, disgustingly tolerant world. To look at him is to look at a skeleton: weak, malnourished, fatigued, and morose. His idea of work is to sit above lanes 5-6 like some fabled crypt keeper and stare lifelessly at the customers. His lanes prove most unpopular, due to his horrifically unsettling visage. It appears most bowlers find the sight of a wretched little whelp on the verge of expiration to be distracting. Had Mr. Knickerbocker hired him as a scarecrow decoration and simply forgotten to dispose of him? By my calculations, Buck has close to four hours a day that he does not spend working. It seems to me that he could perform his dying boy act on his own time. 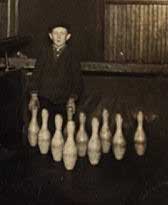 The dastardly Alan. I see the greatest threat in Alan. While I respect him for his efficiency and singular focus when working, I detest his rebellious spirit. I see in him a potential organizer. I have heard him complain about Mr. Knickerbocker's tendency to beat his workers and withhold their pay. I assert that such actions are the inherent right of every employer. If such universal laws of nature bother Alan, he can either best Mr. Knickerbocker in a fight, or walk away like a cowardly quitter.

However, because of his skill, he has the respect and admiration of all the other pin boys. I believe it may become necessary for me to make an example of Alan. The lifeblood of any pinsetter is a functional set of hands with which to clutch pins and balls. His small, youthful hands could easily be broken beyond repair, if not removed entirely. I have done far worse to men twice his size. I will no doubt run this suggestion by Mr. Knickerbocker if he continues to incite notions of organizing amongst the other pin boys.

A LOYAL WORKER TO THE END

I bring to this enterprise a type of passion and intensity never before seen. What has long been the dominion of undisciplined children, catamites, and timid boys too frail to cut in the mines will now benefit from the expertise of a hardened veteran.

I fear no challenge, man, or beast. I do not subscribe to society's tendency to dress people up in costumes such as child, woman, and cripple that make them off limits and beyond scrutiny or manhandling. I shall address this job no different than I would address open combat with a dozen men. I will go in fighting, unafraid to use every means at my disposal to enfeeble, maim, and mutilate. Whether it be bone, flesh, organ, or soul, I will stomp it without delay. I will claw at arteries, twist limbs, and I will gouge and bite out eyeballs.

In short, I will do whatever the job demands of me. I believe it is this level of commitment that sets me apart from all other pin boys. That, in over fifty years working experience in numerous fields. I look forward to many more days and years rising to the top of my field and proving myself a diligent and unwavering worker.