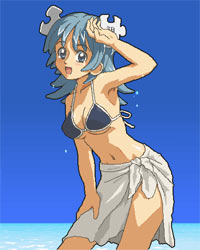 Wikipe-tan, the anime personification of Wikipedia, pictured here wearing a bikini by "Deadkid dk". Yes, seriously.Since this year's two-part introduction of Wikigroaning to the outside world, the game, which was invented by the good fellows "Dr." David Thorpe and Mark "Street Cactus" / "D-Doug" / "a big ol owl" D'Arensbourg, and which briefly took a few (perhaps as many as 8) people by storm, has continually been the main subject of emails coming into my computer. It's also been the subject of at least two websites, calls making my phone blow up, a handful of articles in print and online, probably a discussion on the secret Wikipedia administrator mailing list, and at least one death threat. That's right, I got a death threat. From a Wikipedia guy.

Well, I didn't actually receive the threat, but my mother and brother took it on my behalf shortly after a small writeup appeared in the weekend edition of the Journal back in June. It turns out I had the terrible misfortune of moving away many moons before the call announcing my certain doom was placed, and on top of that, I didn't even find out I was scheduled to die until days after. Rather unemotionally, and only after being asked if I would happen to know where the dog's medicine was, my mom said, "Oh yeah, I remember what I was going to tell you. Some guy called the other day for you and said he was going to kill you." "Oh, really? Did it sound like anyone I know?" "I don't think so." "That's strange."

Rather than living in fear as I had originally intended, I mistakenly forgot all about it until last week, when my mom called me again and asked if I had ever heard anything back from that computer death threat guy. The answer was a big ol' nope. I felt very alive, and I felt like it was time for another round of wikigroaning.

The rules are simple: Find one useful Wikipedia article, then find a nerdy, but similarly-worded article, and compare their lengths, content, and quality. As if by magic, the Internet's biggest secret will begin to unlock before your very eyes.

Over the last couple days, we enjoyed a good round of the game in FYAD. Here were some of the best pairs we came up with: