Miss out on the news that happened over the weekend? Fear not, Newsblargh! is here to fill you in on all the news that you should be glad you missed! 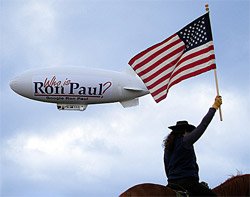 Ron Paul, the fragile elf-like libertarian running for the Republican presidential nomination, has a legion of Internet supporters. With no help from the Republican machine, these starry-eyed dreamers hope to give Paul a push to the White House using the invisible hand of the free market. Their devious plan to get Paul elected is threefold.

Step two of the Paulites' plan is to max out their credit cards donating to Ron Paul. Ron Paul can then buy amateurish TV spots filled with ugly people reading from cue cards.

Their pièce de résistance, which I'm pretty sure is French for "worst idea yet," is to finance and launch a blimp imploring people to Google Ron Paul. 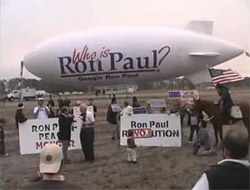 The blimp was launched December 14th at a ceremony attended by several people, a horse, and a flag. Weather has been interfering with their schedule, but in the coming week citizens of North and South Carolina will be treated to none other than the Ron Paul blimp drifting slowly overhead. Onlookers may pause and gaze skyward and briefly wonder when the Ron Paul Chrysler dealership opened.

Paulites are hoping the end result of their efforts will be more people logging onto the Internet to find out about Ron Paul. There they can lure the unsuspecting victim to one of the Ron Paul websites and suck them down the rabbit hole of Ron Paul madness. Before you know it, the new recruits will be donating money for the Ron Paul blimp to get more people to learn about Ron Paul and donate money to the Ron Paul blimp. Then something else will happen. Then he'll be President of the United States.