Winter Sucks, But Try To Enjoy It.

If you're reading this, it's too late for me (to correct any spelling mistakes until Monday), for I'm in an airplane over the Atlantic. I've spent the last three months in Rome doing as the Romans-mostly crashing scooters and wearing tight pants, but now it's over, and I have no idea how to spend my time back home. To help myself, I've compiled a list of my old favorite winter activities. You might remember that I wrote a list of summer activities a few months ago. Don't worry, neither do I, but here's part two.

Winter is an amazing period of the year. The other seasons are filled with comfortable weather, which fills the average person with yard work and a guilty conscious if they waste a day. The cold season relinquishes the human from both responsibilities. If someone wants his or her sidewalk caked in three inches of black ice for an elderly couple to break a hip or two, so be it, and if that person doesn't want to search for the few pleasures found in the achingly cold weather, that's A-Okay. So for three months a year, the world releases its grip on a person's ambition, allowing them to fulfill any goal or desire. These desires, coincidently, revolve around idleness, from the impossible (complete hibernation) to the accomplishable (watching eight hours of television in one sitting.) For centuries, snows ability to cover the earth with its perfect white surface has been compared to a blanket; but in reality, the whole season acts like a down comforter to the normal person, causing them to hit snooze for a quarter of the year. This has to stop. Get up and move your body! 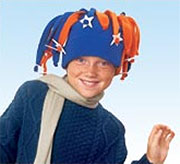 Spending a day on the slopes is an enthralling adventure. The sun is shining, the breeze is cool against your red face as you careen down a mountain, the snow is beautifully covering up the solid ice, and the ambulance is exceptionally sterile. For those who've never experienced the raw excitement of skiing or snowboarding, go out and try one. It doesn't matter which, you'll break your wrist no matter what. Actually, just go to the hospital and thrust yourself down the fire escape, that way you're already near medical assistance and some kid wearing a dumb hat on a snowboard won't call you a fag while spraying a ton of ice on you as you hold your severely broken arm. 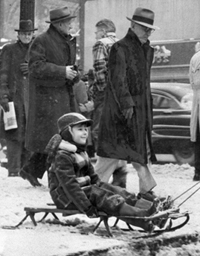 Sledding is a great mixture between excitement, sitting, and being uncomfortably cold and damp. Sort of like losing your virginity. So while skiing requires a low level of skill and coordination, the only thing necessary for sledding is a desire to get to the bottom of the hill.

Sledding was my favorite winter activity until the influx of plastic slides. I prefer my grandfather's steel runner. This thing's built like a medieval weapon. But now the cheap plastic things strip the snow off the hill, break easily, and what's the point of sledding if you can't sever an unsuspecting child's Achilles' tendon?

Look at the Stars

In case your job isn't filling its primary purpose, simply gaze up at the stars to feel insignificant and worthless. The unbelievable size of the universe is enough to crush any person's ego. Also, the stories behind the constellations are much more fucked up than your anime bullshit.