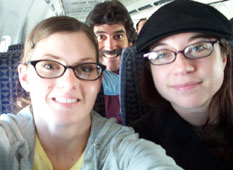 Gordon Freeman...or is it?!?!?!?!?!?!I am as shocked as you to announce that late last night - and flying in the face of recent delays - highly anticipated First Person Shooter "Half Life 2" was pressed to gold master is what I'm posting on the front page of Something Awful in some alternate universe. In the boring and confused non-alternate universe we live in this past week or so has been an almost epic saga of stupidity in gaming. Things got off to a rocky start right off the bat with Valve confirming that the supposed leaked source code for Half Life 2 was actually the leaked source code of Half Life 2. In between delicious sloppy joes Gabe Newell managed to choke out that the leak would once again cause a delay in the product. More interestingly sources close to the industry who also draw Fireman comics tell us that Valve had already planned the delay well in advance of the source code leak.

Some, myself included, have theorized that the recent source code leak at the house of sorrows that is Valve was more than just a happy coincidence for those toiling away on Gordon Freeman's next adventure. Blaming the delays on the leaked code has enabled Valve to dodge much of the anger of their patient fans and Valve's tall tale about the almost preposterously elaborate means by which the code was supposedly stolen seems high on drama and low on probability.

According to Valve Newell's computer was hacked by a customized Trojan virus intended to install a key logger and grant remote access to Newell's system. Met with disbelieving cries of "how is that possible?" Valve released a detailed timeline that pointed to incredible cunning on the part of the hacker. 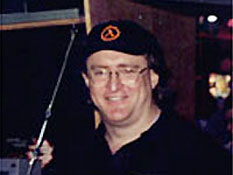 Wha' Happened?11:08 AM Newell shoves pizza boxes off himself and scrubs off the moss growing on his face due to immobility. Prepares to go to work for the first time in seven days.

12:13 PM Arrives at Valve's offices and visits the same Jap Scat site he does every time he goes into work. Newell is unaware that Browned-Teen-Tomatoes.com is actually a front created by international hacking conglomerate "~+++==Deep 15==+++~" with the sole purpose to attract Newell with its content and install a key logger on his system.

3:09 PM Newell is woken up by coworkers concerned that he might have suffered a heart attack. Newell screams for them to "go back to work on that game thing". Moments later he receives a call from the security company installing an alarm on his house. Newell creates a text document on his desktop called "burgalar[sic]alarmpasscode.txt" that contains the seven digit code given to him by the security company.

3:20 PM Gabe Newell screams "what the fuck is Bink?" at employees for ten minutes and then declares "it's been a long day" and heads home in his gold filigreed Hummer 2.

3:48 PM While Newell is sound asleep on the floor of his house a Yakuza mercenary in the employ of Deep 15 bypasses Newell's burglar alarm using codes grabbed by Deep 15's keylogger. The Yakuza mercenary climbs through ventilation ducts and into Newell's fortress of solitude, which is what he calls the room where he plays Everquest for 20 hours a day.

4:19 PM Just as Newell stirs to speed dial the delivery of groceries to his home the Yakuza mercenary finishes burning a microdisc of Half Life 2 source code. The mercenary escapes on a zip line with the microdisc containing the source code looking like nothing so much as a mole on the mercenary's face.

That's how the story goes according to Valve anyway; I think the real timeline for the release of the Half Life 2 source code might have been a bit more simplistic.

12:05 PM Lunch meeting at Huge Dan's Burger Corral on how to prevent public backlash from massive delay in the release of Half Life 2. Newell decides that the best choice is to fake a leak of the source code.

12:06 PM Newell, having finished lunch, drives back to the office in his gold filigreed Hummer 2 and begins uploading the Half Life 2 source code to a "warez group" that happens to be composed of fellow members of his Everquest guild. While the source is uploading he probably visits a hardcore Jap Scat site.

The huge Half Life 2 scandal - engineered or not - has been the biggest story in the gaming industry for quite some time. However, even in the past ten days it doesn't stand out as the stupidest story. For example, did you guys know that Nokia's new N-Gage handheld gaming device and phone was just released? No? How could you not be riveted by the hideously inappropriate media campaign Nokia has launched to promote the N-Gage? Nokia has spent millions despite the fact that every sensible indication is that the N-Gage is the biggest piece of shit since a meteor made of shit crashed into the planet Crapulon's capital city of Shitopolis.

Just look at some of the amazing features Nokia has packed into the N-Gage! 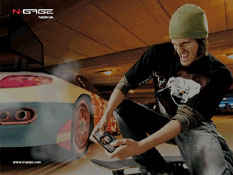 Yeah! Radical to the max dude!

The N-Gage is about as comfortable in your hands as a block of molten iron.

Talking on the N-Gage in phone mode makes you look like the victim of a tragic Frisbee accident.

The N-Gage uses the proprietary "Stop Wanting to Play System". In practice it means that it is so time consuming and complicated to swap out the microscopic game discs that you actually stop wanting to use the N-Gage as a gaming device.

Is backed by the same quality control guarantee that ensures your normal Nokia phone "probably won't explode and blind or deafen you."

May not contain bees or wasps.

Best played while riding a skateboard in a parking garage next to a giant pixilated sports car.

Your chances of having sex with someone other than your abusive step-father are not dramatically decreased by owning an N-Gage.

Guaranteed to get you laid with your hot abusive step-father.

Frequently taking phone calls on your N-Gage finally gives you that excuse you've always wanted to legally change your name to Taco Head.

Comes with a free 120 page booklet on how to insert game discs into your N-Gage.

Playing games on the N-Gage can significantly increase a terminal cancer patient's spiritual acceptance of death. 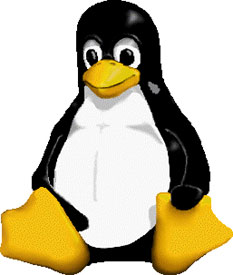 Tux, you unlock the secrets of my Heart Beeps.Even the complete lunacy of the N-Gage has some stiff competition from the upcoming release of "America's Army: Operations" for AMD's new Athlon 64 chip. Because there is no Windows support for 64 bit processors "AA: Operations" and other titles will include a barebones version of a 64 bit Linux OS on the game CD. To play the game you simply insert the CD, restart your computer, wait for it to boot the on-disc operating system, hope and pray it correctly detects your hardware, and then enjoy the awesome power of AMD's new processor! God knows the gaming public has been demanding software that sacrifices a shitload of convenience for slight performance increases in gaming.

Indeed, let me just cancel all these bit torrents I have open, save my Photoshop images to my desktop, close Word and then reboot my computer with an entirely different operating system so I can play "America's Army: Operations". I haven't played the new America's Army game but if it's anything like the last one I will lose interest in it while my computer is still booting Linux. Hey, and if not, all I did was interrupt everything I was doing to play a game and when I'm done all I have to do is take the game disc out and reboot. Sounds like a hoot and a half to me and kudos to AMD and the US government for ensuring that gaming can take a huge leap back towards the days of game-specific memory management and dreadfully slow DOS loads.

I know it's technically not Linux's fault on this one, but can fucking ANYTHING with Linux be better than with Windows? I constantly hear people hyping the everliving shit out of the latest distro of BucketBSD or whatever, yet it seems like doing anything in Linux requires me to jump through about ten additional hoops. Guess what you slovenly, elitist, unkempt faggots; Windows is popular because it works. Linux is unpopular because after all these goddamn years it's still a trainwreck of shell script and rebooting to play what few games exist. Until such a time as a 64-bit version of Windows XP hits the market I'll be waiting out the 64-bit gaming frenzy. You guys can have your fun with the splendor of "America's Army: Operations".

Hah! Now that I've got your hopes up with that intriguing title, allow me to punch you in the stomach with the news that you've been dying not to hear! A new Photoshop Phriday is online and ready to terrify the seat off your pants! This is all of course assuming you have some terrible fear of Photoshop Phriday, which you probably don't. Livestock here, letting you know that the next generation of games is still not out! But until then, you can feast your eyes on some quality Phake Games from the SA Forum Goons!

Take a break from staring at screenshots of Half-Life 2 source code and enjoy some real winners! And unlike those shady bastards at Valve, we're not teasing you shifty release dates. These games aren't coming out ever.