Analysis: The Heat Was Too Much for the Heat

You could say that in the first game of the 2014 NBA playoff finals, the Miami Heat got a little hot under the collar. You might even say that the San Antonio Spurs kept their cool. This is because the Spurs won and the Heat lost and the air conditioning in San Antonio's stadium was not working, which made the actual temperature inside the basketball arena hot. 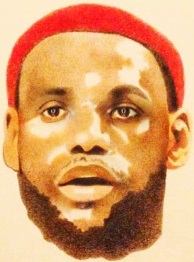 Another way of looking at it is that LeBron James melted. From the heat, like the name of his team, and also from the pressure of the game. LeBron James did not play well enough and his team lost. As a result, the Spurs beat the Heat as well as the heat.

After studying the film closely I have determined that the Miami Heat weren't able to stand the heat. They certainly got out of the kitchen, like it was too dang hot for them. In this scenario the kitchen was the game. They didn't leave the game physically, but they did leave it in the sense that they didn't win.

When asked about his team's performance, Miami Heat coach Erik Spoelstra essentially said that the Heat were burned to a crisp, without using that phrase or anything like it.

While the Miami Heat melted, the San Antonio Spurs played like they had a fire lit under them. A good fire. The kind that makes you do well instead of melting like the Heat did.

Tim Duncan was especially good, dunkin' the ball in the hoop. Think about it folks.

I kid, but what if that's true? That's a little sobering. What if the Miami Heat were truly led to believe that the formula for their success was one hundred percent perspiration, as a result of their own mistaken recollection of the popular phrase or perhaps as a deliberate act of sabotage from a bad person?

Well in that case someone would be in hot water.

So where does the series go from here?

Consider the fact that San Antonio obviously turned off the air conditioning unit in their stadium on purpose, because it would clearly give them an advantage over the team from Miami named the Heat. One can only imagine that Miami will retaliate with a similar dirty trick. In game 2, Miami's stadium will probably be littered with actual cowboy boot spurs. This will only impact the San Antonio Spurs. They will step on the sharp spurs and yelp in pain while the Heat dunk the ball in the hoop.

I predict that the Spurs will be spurned, and they might even be spurred to lose. In that case it is also likely that the Heat will be "on fire" which means they will do well. This will fan the flames and it will be time to saddle up as the series becomes a scorcher.

I have no understanding of what the game of basketball is or why these men are running around on the court. Thank you for your time and this career.