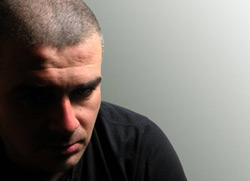 It was twelve years ago that Kyle Hoffman posted the words "Bob Ross Ate My Balls" on his Geocities site, and to this day he has not received so much as an apology from the Ross estate.

Today Kyle lives in a tiny Detroit apartment decorated with milk crates and unwanted furniture that has been salvaged from various curbsides. If you placed your foot against his front door and stretched forward, your fingertips would almost brush against the wall at the opposite side of the apartment. Kyle doesn't mind. Having a small home means less moving around, and even the tiniest movement can flare up pains from his old injury.

"Before all this, I was a promising young testicle model." His hands shake slightly as he lights a twisted stump of a cigarette, its filter stained by the original owner's pink lipstick. "Mostly did commercial and billboard work. My balls were photographed while resting on stacks of pancakes, bottles of cologne, even upscale cars. Damn it, I was good, too. Those balls had commercial appeal. They said I was a natural."

The memories bring a proud smile to Kyle's face for the first time since I've met him. Then, the sound of a passing siren followed by a revving chainsaw and the roar of an elephant snap him back to the reality of his miserable life.

"But that was all before... you know. Now I'm lucky if I can book a commercial shoot where I put my elbow in a bowl of ramen noodles or rest my penile shaft along a trial lawyer's ear like it was a pencil."

Kyle explains that his "Bob Ross Ate My Balls" site was a cry for help from someone who was too intimidated by his attacker's stature to contact the authorities. The response he received after its launch was something he could have never predicted.

"People actually laughed at me. Here I was, the victim of a horrible assault baring my soul, and they found it amusing. I was appalled. Of course, this was back when the internet was still in its formative years, so things weren't as civil and compassionate as they probably are now."

Then, another surprise. In the weeks and months that followed, other victims came forward with sites of their own. First it was a man who was brutalized by Mr. T, then another who claimed that his balls were eaten by Pat Sajak. Kyle's actions had given courage and hope to fellow survivors who had been too ashamed and intimidated to take action. By the end of 1998 over three hundred celebrities had been revealed as ball eaters, while Mr. T was revealed to be a serial ball eater, having consumed more than fifty sets of balls without consent.

While these victims found solace in each other, the outside world continued to laugh. One survivor, who wished to remain nameless, recounted this difficult time.

"I downloaded a photo of Mr. T and edited it with a word balloon that read 'Gimme them balls, fool!' in the hopes that people would understand the atrocities this man committed if they had a visual reenactment of the experience from my point of view. Instead, they laughed even more and passed the picture around in newsgroups and e-mails so more people could get a kick out of it. If it weren't for the support of the other guys who had their balls eaten, I don't think I'd have survived all these years in such a cruel world." 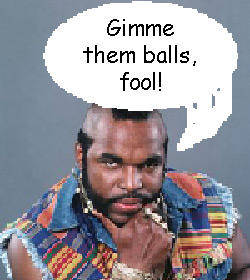 The image in question, circa 1998.In the decade that has passed since it all began, no criminal prosecutions or arrests have been made in spite of numerous victims who have been willing to provide testimony. To understand how such an injustice is possible, I spoke to our own attorney.

"The thing is, you need physical evidence to prove that a crime of this magnitude has actually taken place," explains Leonard J. Crabs from the women's bathroom in a local Popeye's Chicken. He has drilled a set of holes in the door to peer out of, one directly above the other so that he must tilt his head at an awkward angle.

"Since none of the victims reported their attacks in a timely fashion, all physical evidence has been digested. In the rare cases where female celebrities ate balls, it is possible that a pregnancy resulted, which would theoretically set the groundwork for a victim to prove the case through DNA testing of the baby. Even so, a victim would have a difficult time getting the court to order such a test. Even if one was granted, babies are evasive little fuckers when you try to stick them with a needle or a transmitter that you stole from a dolphin's fin."

The only course of action a victim is left with is tricking the celebrities who ate his balls into confessing, which Kyle Hoffman sees as a dead end.

"A few months before Bob Ross died, I showed up to an autograph session with a type-written confession of his brutal acts in hand. He went to sign it with that damn crystal paintbrush he always carried around without so much as a glance at me or the words on the paper, then he paused and looked up, smiling. The bastard scribbled something on the signature line, then handed it back to me before licking his lips and patting his stomach in a cruel pantomime."

What Kyle found in lieu of a signature haunts him to this day, and underscores the evil that our society has not only left unchecked, but has treated as a source of perverse amusement.