From Crawford with Love (and Souvenirs) 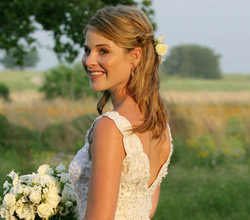 As beautiful as a pallet of shrink-wrapped reserve notes looted from the back of a C-130 to pay for a CIA black op.This weekend marked a very special occasion for every patriotic American. This should not even need to be said, but I am not referring to Mother's Day. Presumably most foreigners have mothers and are able to unpatriotically celebrate the woman that brought them into this world to take our jobs.

Saturday, May 10th, was the long-anticipated wedding of Jenna Welch Bush to her fiancé Henry Chase Hager. Jenna Bush is President George W. Bush's beautiful daughter and Henry Chase Hager was ordered from a Young Republicans catalog and delivered to Crawford just in time for the wedding. After a quick hosing down to wash away his packing gelatin he was swaddled in a tuxedo and trundled out to place the ring on Jenna's finger.

It was a magical moment attended by the finest minds of our generation. I was there, of course, and Condie and SecDef Gates were both in the front row. The Cthonic Rove gnawed his way through the earth's mantle directly above the Fox News studio and emerged blinking beneath the blue Texas sky. Those who could not attend due to prior obligations were represented by seated holographs transmitted from the bridges of their battle cruisers.

Every guest marveled at the bridal arch made from latticework woven with the fluttering shreds of 10,000 gaily colored documents direct from Cheney's man-sized safe. The canary yellow was for torture memos, chartreuse for renditions, and teal for everything related to a technology exchange with the Reptilians.

There wasn't a dry eye in the house as bride and groom embraced, and it was only partly because of the eye-watering crypt stench wafting from Rumsfeld and his entourage of bone harlots. I swear, in that magic moment as Jenna and Henry's lips met, I could hear the peal of thunder and the uncorking of one of the more serious vials.

There was a bit of a snafu when Hager tried to eat Jenna's nose during the kiss, but he was pried away before he could do any lasting damage, much to the amusement of the guests. The happy groom was led away to a room in the basement where he could enjoy his nutrient paste in calming darkness. 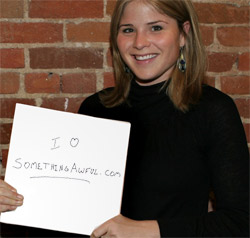 Jenna is, understandably, a huge fan of Something Awful.Jenna enjoyed the first dance with her father (Prince's "Bat Dance"). The groom reemerged briefly to feed Jenna a warm handful of pre-chewed cake directly from the fistula the ag department at the University of Texas installed in Barbara Bush. They wanted to watch how she digests food in her nine gizzards. They think the secret to her digestive process is a poorly-understood enzyme called "hatred", although I'm still waiting for the final papers to be vetted by a faith-based science board.

Precious moments such as those that occurred on Saturday are all too fleeting. One minute you are watching Henry Hager eat a flower centerpiece from a table while Secret Service tries to catch him in nets. A minute later you are being bundled into your cars and told to drive as fast as possible to reach minimum safe distance before Cheney's core explodes.

Certainly I can treasure these memories, but I wanted something a bit more tangible.

In the quiet town of Crawford every truck stop gift shop and curio bonanza is hawking collectibles related to the wedding. Among the trinkets are Christmas ornaments, mouse pads, and various other tasteless baubles certain to appeal to the sort of dull-eyed peasants that ask for gift wrapping at a counter covered with displays for something called "smokeless tobacco." I hesitate to even consider what manner of flavor country is ruled over by the "Skoal Brotherhood."

Fortunately, a well-chosen Masonic handshake gained entry for me to the back room of a Crawford haberdasher named H. N. Eilesworth. The man was trying to sell me on buttons in the shape of the 23rd Congressional District when he recognized the tickle of my 33rd Degree finger on his palm. I was immediately showed through a door marked with the word "NO" and the symbol of the compass. I descended a spiral staircase by candlelight and found myself in catacombs stocked with the elegant accoutrements befitting a Masonic secret lair. 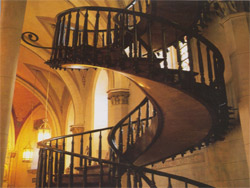 The vault in Crawford was no match for our vault beneath the Lincoln Memorial (sweet irony!), but it will do on a hot May day.The arched halls were flanked on either side by jars of pickled bald eagles and US maps dating back to the 8th century, when Masonic Vikings were the first to discover America. I paused in an alcove to watch a flickering film reel from the 1920s. Potbellied men with thumbs hooked in tweed vests chortled at the spectacle of a pig gorging itself on an immense pile of truffles.

Gorgeous tapestries hung from the ceiling as we entered the great chamber. In their time-worn threads each depicted one of the many secret Masonic battles fought against the druids of Old Europe and their eternal sorcerer Karl Marx.

At last we reached the inner sanctum, where the true artifacts awaited my perusal. The bubbling tank filled with Bush-masked crabs of the Orient held my attention only briefly. It was an old trick of selective fishing, and the grotesque face on each carapace hardly resembled Bush at all. I suspect some Masons might sell you one as a Woodrow Wilson-masked crab.

No, my abiding love has always been whalebone and the delicate art of scrimshaw. There, carved from the tusk of a blue whale, most sensitive of the whales, was my desire. My memories of that perfect Saturday in Crawford Texas will endure forever, carved into the bone of the world's saddest whale. I will always treasure my whalebone front license plate bracket filler with the image of Jenna and Henry Bush-Hager riding a dragon into the sunset. Beneath this image are inscribed the words: Non est ad astra mollis e terris via. There is no easy way from the earth to the stars.

Other than a dragon.

And a battle cruiser.