Thursday, Jul 14, 2011 by The Family Institute of Love and Togetherness

A Declaration of COMPLETE FEAR over a CHANGING WORLD 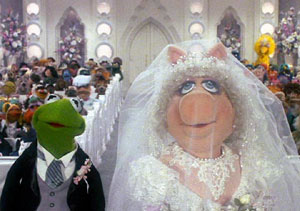 THY WILL BE DONE.Faithful monogamy is the cornerstone of reasonable society -- as proven by several Bob Jones University texts, megachurch P.R. agents, and Dave Berg of MAD Magazine's "The Lighter Side of..." section. Studies have proven that, without the concept of marriage, the Earth would spin off of its axis, leaving its inhabitants to live out the rest of their lives uncomfortably baking in the sun's harsh space fires.

Indeed, the existence of marriage protects our youth, upholds dad law, keeps airplanes in the sky, and sedates the little man in your refrigerator so he cannot tear open your windpipe when you open the door. And yet many would deny a world of mothers and daughters, brothers and uncles, dads and grads, as well as grand-dads and dad-grads. Without a doubt, it is almost "games over" for the institute of marriage:

Therefore, should I become the legally elected representative of a trusting populace, for the sake of my beloved constituents and private sector blood buds, I vow to uphold the Christian moral standard through my:

The Vow of Civic, Religious, Lay, Business, and Social Leaders

We the undersigned do solemnly vow that any elected official who does not abide by the terms listed above will not receive our recognition, even if we are walking down a very long hallway towards them, all while keeping in mind the amount of discomfort that sort of social situation would bring. We also promise to remain faithful to the contents of this document and also our wives, time permitting.

Help us out here, God.

Sign below and receive your free Conservative Christian Birthday Fun kit by mail:

– The Family Institute of Love and Togetherness