In a Drunken Rage, I Choose You Vodkachu 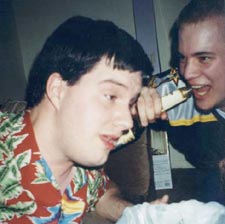 Mister Adkins offers some helpful screams of encouragement for a suffering friend.Another milestone has come and gone in my life. No, I'm still not balding. No, I haven't killed a man just to watch him die. My liver has simply survived another party. I won't go into the incredible detail with which I explored "The Robitussin Incident", I'll just mention that me and a few of my friends started drinking heavily on Saturday afternoon. Twelve hours and about 50 gallons of alcohol and two bar-closings later, the drinking came to a screeching halt with the gastric eruptions of one of my chums. The subsequent passing-out "domino" effect of most of the rest of my buddies sealed the night's fate.

I was not so wise. I and one brave soul continued drinking for a few more hours, downing a shot suggested to me by a forum member. It was good, in fact, so we did this shot repeatedly. It looked like an ounce of flesh and blood in a glass. It didn't make me throw up. That is really the key.

I then proceeded to have a long and insulting conversation with "artfag" that reached a definite nadir with the following quote:

For those of you not familiar with the shady characters that cat around the forums, miss fag is a female. Not that her gender excuses my simultaneously flattering and hateful attitude towards her throughout the conversation. This single quote is very meaningful though, because it is indicative of my drunken behavior for the preceding six hours. Since it is immortalized in an incredibly embarrassing (not Sam Jain caliber embarrassing) chat log, and since I can't remember anything specific I said to women while intoxicated earlier in the night, this will serve as my drunken horror banner.

I don't think I need to mention that the next morning I felt like a heap of horse manure that someone had spoon fed to an elephant and then scooped out of the elephant's colon with a snow shovel.

The World's Strongest Man is Scary 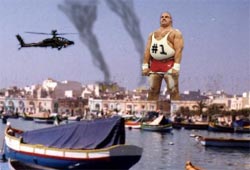 A Maltese Apache helicopter tries to stop last year's rampaging champion.Not a lot of things frighten me or intimidate me any more. Unless you count leaving the house as one of those things, but I mean how can you count that? Everyone is afraid to leave their house with all the Chinese kung-fu gangs that rule the streets and I don't think my town has a Walker Texas Ranger to keep them in check. No, my fear centers on the World's Strongest Man Competition, because the gigantic monsters (and I mean that with all due respect if you are reading this monsters) that compete in that event put the fear of god into me. Every time I see the competition on ESPN 75 I feel like the Japanese army hearing radio reports that Godzilla is approaching the coastline.

Very similar to the Japanese army I am fascinated by my impending doom and can do nothing but stand by (or in this case sit on the couch and drink Bud Ice) and watch as skyscraper-hungry giants duke it out. In case you have never heard of the competition, here is some background for it that I will put in italics like I am quoting a source when I actually made it up:

Held 16 times a month in the island nation of Malta, the MetRx World's Strongest Man Competition pits 25 of the densest human beings on earth against each other in a wacky battle for testosterone overload dominance. Through a number of grueling events the competitors will challenge one another for the title of The World's Strongest Goddamn Man. The winner will not only get to walk around in an undersized tank-top that says "I AM NUMBER ONE", he will also be permitted to destroy the entire island nation of Malta.

The best part about the WSMC is most certainly the wide variety of horrifyingly torturous events that Samsonson and his bull-necked Scandinavian "-son" clones must endure. The following events are not made up; these are some real examples of what these crazy bastards do to win the heart of the princess of Malta. 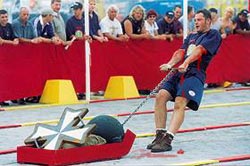 Damn, there go those arms again."Sure, I can carry an anchor, no problem," is what you are saying, I am certain. I can hear your stupid nasal voice right now. Think again Dexter, this anchor comes from some science fiction aircraft carrier that is ten miles long. I would guess the anchor to be approximately the size of a minivan and made out of solid steel. I think last time I watched this they listed the weight on the screen as "more than you can even imagine". Still, the competitors are tasked with carrying this to the finish line and are scored for time. A lot of them fail to make it when their arms tear off, but many do manage to stagger across the finish line, the anchor clutched in their teeth while they spray blood from their stumps.

After the survivors of the first competition have had their arms sewn back on, they proceed to the truck pull. Pulling a truck might be fairly easy, but they have really big European freight trucks and then they put the anchors from the first competition in the back of the truck. I think they put the bodies of all the guys who died in that competition in the back too. Then the competitor has to grab a chain lashed around the vehicle's bumper and pull it across the finish line. The finish line is on the edge of a steep hill down, so if the guy pulling the truck builds up too much momentum he gets run over by a 40 ton truck. This really doesn't do a whole lot of damage to these guys though.

Congratulations giant armless Scandinavian guy who has won eight years in a row, you are now allowed to wear your shirt, stomp around Malta eating people and rescue the princess from her cloud castle. Jesus.