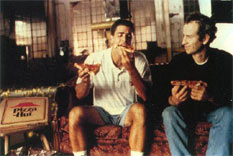 If only science could discover a way to put cheese inside the cheese.Hey, how's it going? I just wanted to let you know that my favorite movie of all time is a Will Smith action vehicle being released this summer. I just can't get enough of his wisecracking and punching things. Maybe they'll give him a gun in this movie or maybe they'll just have him rely on his wits and sex appeal. It doesn't matter what he uses to overcome the villain, I know I will enjoy it. Will his buddy be another black guy or will it be a white guy? Maybe it will be Ben Stiller. Boy, that would make it double the best movie ever. Almost more than I could handle.

I can handle a lot too, believe you me. Why do you think Taco Bell just added those half pound burritos that taste like a cat's lemony asshole? Yup, all me. I wanted bigger and worse and that's what I got. Thank you, Taco Bell. And those pizzas with cheese in the crust weren't enough so if you don't mind I went ahead and asked Pizza Hut to start putting cheese all through the bottom part too. Dominoes wouldn't play ball, but at least they introduced some sort of new 5 for 5 deal where I can get enough pizza to choke a dolphin. If I can't get what I want then at least I can get a lot of it.

God I loved New Coke. I wish they would bring that back. In the meantime at least I have Cherry Vanilla Coke. I think I might ask them to add another flavor to that. I'm thinking either maple syrup or butter. And Grape Pepsi?! Whoever thought of that is a genius! Twice as good as Surge. Although, on second thought, maybe I'll go for a brewski. I could get a Miller or a Bud, but I've been hearing an awful lot about this new beer that has coffee and ginseng in it to make you smarter. Oh, that's right, it was my idea! Who wants a Red Bull?! Whoop, there it is! It sure tastes awful, but that little can is cool and it gives me energy to eat some more pizzas.

I know! Let's play some videogames. I've got Madden, Halo, Grand Theft Auto, Tony Hawk, and Luigi's Mansion. I don't actually own a Game Cube, but somehow I got Luigi's Mansion. Let's forget about that though, let's talk Tony Hawk! Woo, did you see this shit? I can put myself in the game and I can play as Bam's fat dad! Man I love Bam, he is the Mark Twain of our generation. Did you see the time he stole something from one of his friends and then defaced it with vandalism? I know! Totally hilarious. Whatever will Bam think of next? If we're all really lucky maybe we'll get to see Johnny Knoxville too. 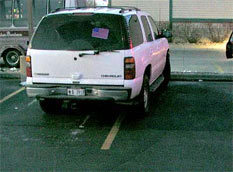 Wait until you see me parallel park.I'm getting a little bored here though. Let's turn on some reality TV. Some college age girls are about to get drunk and dance, let their inhibitions run wild, and then there may be drama in the house because one of them will start making out with one of the guys! I think the blond is the hottest. I like her tits. I like tits in general. The bigger the better. I like them so much that I am responsible for breast implants. I want a woman to stick so many of those into her chest that her tits look like pillowcases full of dodgeballs. Haha, Dodgeball. What a great movie! The part where they raise money by doing funny stuff, it almost reminded me of something Adam Sandler might do. Man, that guy is ready for a comeback. Lunch Lady dude! And sing the piece of shit car song!

I've got the mp3 on repeat in my ipod. I love my ipod so much it's like a part of my body. Did I tell you that I got the 500 Gig Generation VIII? Yeah, I'm still demanding more and more, because I want to be able to hit play and then just sit back and wait to die knowing I'll never hear the same song twice. Let me take some pictures of me with my ipod and post them on my blog. I'll write something up about politics and sex. I think I can cover both in three sentence fragments and capture my opinion with this emoticon. Then I'll fill out an online questionnaire that will determine which character I am from Star Wars.

Did you see my new tattoo? Yeah, it's a tribal. It's based on some Indian shit I saw at a bus station. I think it means "BOSS." I'm also considering a sleeve done on the other arm to look like barbed wire with a skull in the middle. Or a fucking barcode. Man, that would rock! Or some Kanji. Can't get enough Japanese shit I can't read. Let's do up my whole back like a sheet of rice paper and for nostalgia's sake put some woman on there. With big tits. Huge ones. Big enough to choke a fucking dolphin. 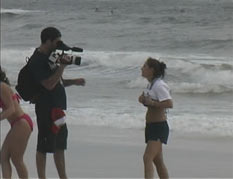 Things are about to get wild.Whoah, look at what time it is. I've gotta blow this pop stand. Hey, yeah, I see you admiring the way I parked. That's because I drive an SUV and it requires two parking spaces. People probably understand that my car is bigger so it needs bigger spaces and if they don't then they should probably buy an SUV too. Then they will understand. Oh, you want a ride? Well, usually I drive alone so that I can enjoy both heated seats at once, but I guess there's a first time for everything. Hey, I know, we can see what's on the radio. Hmmmm…now I'm torn. Howard Stern or Bob & Tom? It's a tough call because they're both so in my face and original. I know! I really hate thinking about things and closing my mouth to breathe so I'll listen to Leykis! There's a tiebreaker.

I am really worried about terrorists. They are everywhere and nowhere at the same time, like the Force or Jesus, only evil. Like Jesus if he got bit by a vampire. I will buy anything you're selling as long as you tell me that this rock keeps away the tigers. I mean terrorists. Do you have some snake oil? How about duct tape? A war maybe? Sure, ring 'em all up and you can just take it out of my unborn children's paychecks. Oh, and while I'm here I might as well get some of these incredibly helpful yellow ribbon stickers. I'm showing my support guys. Couldn't get off my fat fucking ass to drop a quarter in a bucket for veteran amputees but by God the tail end of my Excursion is going to look like an explosion at the sticker factory.

Hey, did you see this picture of all the monkey faces next to the Bush faces? Yeah, sure I voted for him, but I think this still might be the funniest thing I have ever seen in my entire life. Haw haw! Bush is a monkey. God, who is coming up with this comedy gold? Ben Stiller? Bam? Gotta be one of those two. 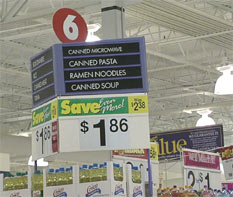 If it weren't for fine eateries like Pizza Hut and Taco Bell I would live off of canned pasta.I have a confession to make. I own every single "Girls Gone Wild" video. No, look, it's not porn because these are real people. Just your average girl, only she's gone wild. They hit the switch on her. Snoop Dogg and that guy from the Man Show who is even less funny than the other faggots hit her bad girl switch. Now she's out of control, like a charging rhino with two sleeping bags packed tight with cannonballs stapled to her chest. They can't help it because it is a primal urge brought on by the moon and Snoop Dogg. It's nature. It's a nature documentary.

Oh, before I drop you off do you mind if we make a quick stop at Wal-Mart? No? Good, there are a couple things I need to pick up. Check out this poster of John Belushi wearing the "college" sweatshirt. That is so totally me! Hmm, $8.99 is a little pricey though, and the printing has the look of "Made in America." Wal-Mart should know by now that I absolutely only buy things made in third world countries. Here we are, just I was looking for. They've got the censored lyrics version of the new Linkin Park album and they have a copy of "The Nutty Professor" for only nine dollars! I can't leave here without that! Oh, shit, they've got a bundle with "Nutty Professor" AND "Dr. Doolittle" for only $15.99!! I hated both of those movies but for a price that low I can't pass them up. Right there is a full night's entertainment. Now I just have to get a six pack of Red Bulls and five pizzas from Dominos.

Well, here we are. Maybe tomorrow I can tell you about my kids and their mad love for "Yu-Gi-Oh!" and those yellow cancer bracelets.