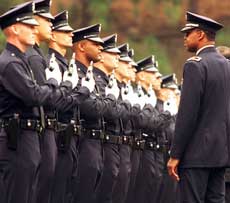 Okay guys here's the plan. First you shoot the poor, then you shoot the tired, then the huddled masses yearning to be free. Okay, let's go bust some heads!Before my gift of top shelf tequila hit the ground an officer drew his weapon and opened fire on it, shattering the bottle with one clean shot. Knowing full well how good an LAPD officer's aim can be, I knew I had to get out of there, and fast! Before I could say, "America the beautiful" an officer struck me with his billy club and screamed, "Welcome to America, wetback!"

What begun as a peaceful demonstration in the park with all of my law abiding friends turned into a nightmare. I tried to remind the officer of my constitutional rights to which he replied, "I'm the constitution now, bitch." He dragged me by my collar to a nearby tree and propped me up so he could beat my midsection senselessly. Mine was not the worst atrocity however.

Out of the corner of my eye I could see that an officer had pinned down Christina Gonzales of Fox 11 News. She was unconscious and bleeding badly. I struggled to break free from the officer who was attacking me in order to help her but it was no use.

Christina awoke as the officer reached for his zipper. He removed his trousers and revealed his penis. Christina screamed, "No! You can't do this!" but the officer said, "I don't care! I'm tired of you news bitches and I'm going to put a stop to your LAPD bashing here and now."

He thrust into her like a dagger through the American flag, screaming racial epithets during the horrible display. He even made a couple of anti-Semitic remarks. The officer let out a loud grunt, zipped up his pants, and tossed Christina aside, her genitals bleeding profusely.

The officer then got on a loudspeaker and proclaimed, "Death to Mexico! Die all wetbacks and beaners! We're taking back this land from you welfare-receiving accident-causing no-job-having animals!" He then pointed to me. "And we're starting with this spic right here!" The last thing I remember was a gun being pointed to my head.

I awoke several hours later in a ditch. I thanked Uncle Sam that I was still alive and kissed the American soil beneath my feet. The American dream inside of me is alive and well, and I will not stop fighting until my people receive amnesty from a government that doesn't want them. We love this country that much and no amount of corrupt cops will stop us! 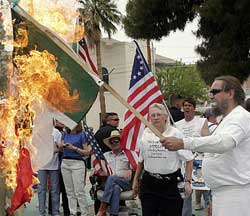 lolWe hope these two diametrically opposed accounts of the May 1st incident at MacArthur Park was helpful in revealing the facts about who was truly responsible. Depending on who you ask, a group of corrupt cops baited innocent protesters and violated their civil rights using excessive force, or good for nothing illegal aliens once again showed their true colors while taking everything this country stands for for granted as the cops used appropriate force to quell civil unrest.

Or maybe a couple of chunti bastards threw a few bottles in order to cause trouble for everyone else, causing a few overzealous police officers to start a fucking riot while attacking unarmed news people, until mob rule took over both sides and all hell broke loose, only to have do-nothing politicians promise to "look into it" while everybody forgets what happened as racial tension continues to build in this unstable world of ours.

Maybe that's it. If you guys want to use this incident to fuel your agenda about why those dirty wetbacks should get the fuck out of our country or why the LAPD is a bunch of corrupt civil rights destroying monsters feel free. Or else we can all learn from this incident what a powerful thing mob rule is, in this case taking hold of both trained police officers and peaceful demonstrators, and turning everyone into a raving goddamn lunatic.