It's pretty much common knowledge that the last thing an LAPD officer wants to do is use any amount of force, but in this case we feel we were justified. I reached for my rubber bullets in order to use non-lethal force because every person, citizen of this country or not, is precious under God. In between beatings I managed to fire off a couple rounds into the crowd which seemed to slow the attackers, even though it pained me to hurt another human being. By then my partner was able to call for backup. 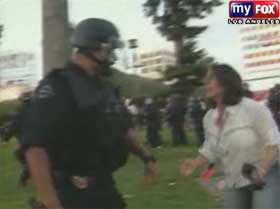 Damn, that Christina Gonzales is one feisty little minx. She must be a demon in the sack. My dream in life is to fuck a girl who would fight a police officer who was wearing full-on riot gear.As if the protesters' relentless attack wasn't enough, the media started to close in. First it was Telemundo, who used their cameras to beat us over the head. It was then that Christina Gonzales of Fox 11 News jumped on my partner's back and dug her nails deep into his neck. I struggled to pry her off of him but it was no use. He was already dead.

Backup finally arrived but it was not enough to stave off the attacks. Protesters rallied around us with the Mexican flag and continued to chant, "La Raza! Death to all whites! Exterminate all crackers, blacks, and Asians! Viva la Mexico! We are the one, pure race!" They even made a couple of anti-Semitic remarks.

We retreated to our squad cars in a vain attempt to escape while bottles continued to be hurled our way. As we raced away from MacArthur Park the protesters' eyes turned to red, their teeth to fangs, and that's when the horchata began to fall from the sky.

At that point the officer broke down in tears and became unable to speak any longer. We'll now hear from Hector Salazar who was one of the protesters at the rally. Officers allege that he was one of the misfits that threw an empty beer bottle at officers, requiring them to act in self-defense and disperse the crowd. However, Hector claims that he was attacked unprovoked and tells his story here.

After my volunteer shift at the Boys and Girls Club I donned my trusty bandanna and headed over to the immigrant rally to show a little peaceful support for my people. As a hard working immigrant who has since become a legal U.S. citizen, I care deeply about my people's struggle to gain U.S. citizenship and would never do anything to make them look badly in the eyes of the media, law enforcement, tax payers, or politicians.

I arrived at the park around 5:30 and joined my friends in a peaceful demonstration. Off in the distance I saw some policemen approaching. They seemed grumpy and understandably so! They toil away in this city everyday putting away criminals and keeping our cities safe for families to bask in the spirit of community. At the end of the day they get pretty tired.

Always ready to help out an officer, I decided to throw them some of my vintage tequila that I brought back from Mexico as a gesture of goodwill. It was then that I realized these were the corrupt cops you hear so much about in the movies and they were out looking for trouble. Unfortunately, they found me.