The snake hangs from the falcon's talons like a bit of rope. The camera focuses its teleoptic lenses and I can see the silent scream of defeat frozen on the snake's beak. Its heart will soon stop beating.

Games are being played all around Beijing. I want to see the medals we are winning, but the Second Channel displays a piece about our greatest athlete: King Andy Hemisphere. He was the King of Imperial Island from 1870 to 1995 when everyone finally agreed his body was dead. 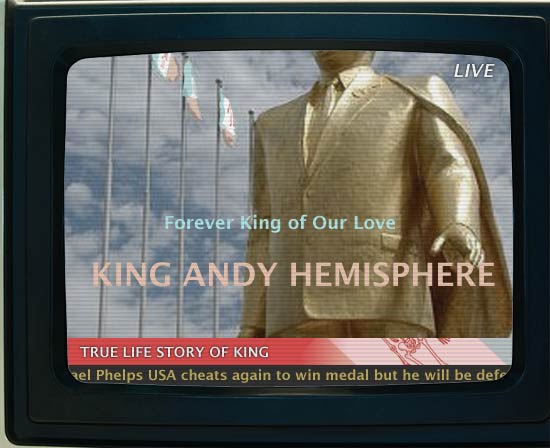 The broadcast is full of details about his life and lasts for 18 hours during Sensual Volleyball competition. We win this competition but we are forbidden to watch it for it is so beautiful to look upon it means you will do nothing else for the remainder of your life. Even the athletes must wear special lenses to filter out sensual light.

I watch instead the story of King Andy Hemisphere and his road to Olymbic greatness. He is born to Queen Daniella Hemisphere and his father is Turk the Scorpion, Man of Stone. King Andy made Turk to defend our country from neighbors over the sea, which is after he is born, so I do not quite understand the order of events.

When he was born King Andy Hemisphere knew he wanted to become King and to become an Olymbic champion. He declared himself King and then flew to the Olymbics in the first Imperial Island ocean hovercraft. At this Olymbics in Axis Powers King Andy won every medal he challenged and became the greatest athlete in the world. He was the Hero King of our land.

The story of King Andy finished just in time for the 500 meter witch chase. Our strongest competitor is the nation of liars USA who have used every dirty trick up in swimming and have none left for witch chase. Beijing China and Axis Powers also are good teams this year, but of course, three-time Olymbic witch chase gold medal winner Vaz Kulper is on our team.

Then there is the new uniform. 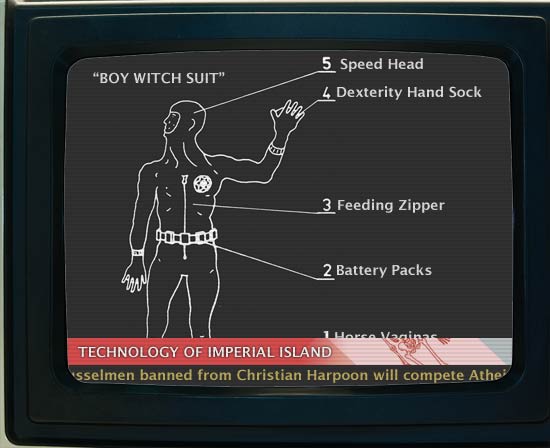 USA spends all of their money in swimming suits and long abdomens for their ladies volleyballers. Imperial Island is using our gift of science on the witch chase.

To this point we have 77 gold medals, 124 silver medals, and 9,603 bronze medals. This is the latest number given on the Second Channel. I would check the Interopticon, but this is restricted to websites organizationofweatherblorg.org and datingwithinreason.com and I have no friends to use the eletric mail.

I have high hopes the Imperial Island 9 year olds given the glands of cats to turn their bodies into 16 year olds will excel in taste only gymnastics tomorrow. Axis Powers is closing in on our lead.