At the halfway mark of his last individual race, Phelps seemed tired, defeated. He was in seventh place. The crowd had turned against him. He phased in and out of existence in our dimension.

Then he seemed to gather his focus, to gain strength. Abruptly, his human form morphed. He became elongated. His torso stretched the entire length of the pool with his feet still clinging to the far side. His distended body bridged the gap between defeat and victory, and he held the gold medal up triumphantly after recompressing his spine.

Congratulations Michael Phelps! America is so proud of you! 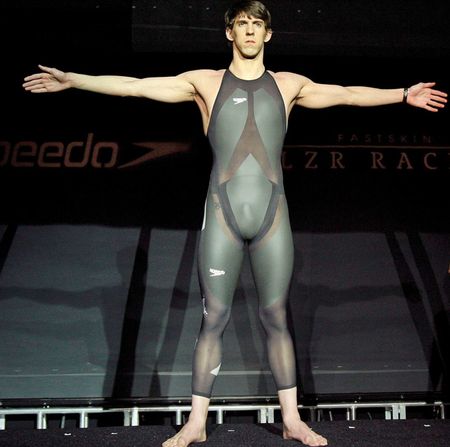 Michael Phelps eats 12,000 jars of mayonnaise a day. With his hands.

Michael Phelps set another world record today at a Taco Bell in Lexington, Kentucky. "We've had people come in here and eat a lot of burritos at once, but nothing like this," said night manager Denise Franklin. "That boy ate a whole mess of burritos tonight. He really did."

The muscular swim god strode into the fast food franchise ten minutes before closing time, and ordered twenty burritos and a medium soda. "He was real calm," said Franklin. "He could see what he wanted to do and that he was going to do it. No question."

Phelps worked his way through the burritos at a blinding speed, starting out strong by eating three at once and then washing them down with only a small gulp of Sprite. "There was some hesitation round about number fourteen," said his coach, Bob Bowman, "but he pushed past it and did the job. That's why he's the best."

As he gulped down the last burrito, Phelps let out a howl and pounded the small plastic table, then he left so the employees could mop the floor and go home. The former holder of the record for most burritos consumed at this location of Taco Bell in Lexington, fifteen year old Jeff Duncan, expressed suspicion that Phelps is practicing post-burrito purging, but Phelps insisted that his burrito record is clean.

Congrats to Michael Phelps!!! You're an American hero!!!!