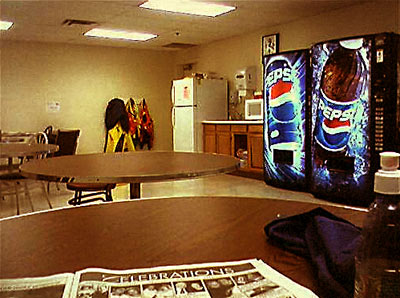 "God damn, I feel like we were doing that for ten hours," Pulaski said as he stretched his shoulder muscles.

"We need more comfortable chairs," Tillman agreed. "I don't mind running these missions, but the least command can do is give us some proper lumbar support."

The door to the breakroom swung open and Carmichael entered the room. The shape of his military headset was still visible in the plastered bands of sweaty hair at his temples and crown.

"They told me when I picked my MOS that this shit was supposed to fun," Carmichael grumbled and pushed past the famously indecisive Donahue to commandeer the vending machine. "I think my blood sugar is low."

"We gonna talk about this shit?" Pulaski asked.

Carmichael ignored the question while he dropped quarters into the vending machine and picked out a packet of peanut M&Ms. He ducked his head low and retrieved the packet, tearing into it and dropping clicking candies into his hand. He turned to face Pulaski, peanut buttery breath wafting from his mouth as he talked and chewed at the same time.

"Debrief is in 90 minutes," Carmichael paused to chew and swallow. "There was nothing we could do though. They took us apart."

"Command says they're preparing an offensive from Canada," Donahue interjected.

"Command who? Lewis? Colonel Shelton? Those guys barely know what the Unfolders are doing in our operational area five minutes after we debrief for them. Fuck them."

"Can I quote you on that, sir?" Pulaski asked.

Carmichael answered by popping another handful of M&Ms into his mouth and chewing loudly.