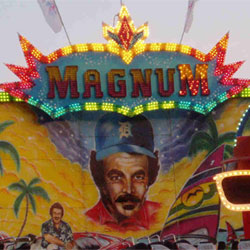 Magnumpi is in the war. Blood is everywhere. Explosions. Body parts fly through the air. A mangled survivor pleads for death. Magnumpi stabs the miserable creature in its hearts as a mercy finish. Magnumpi wipes gore from his eyes and continues the slaughter.

His heartbeat pounds in his ears. He kills his way through the enemy. Their bullets do nothing. Their swords clatter from his metallic arms. Destruction is his wake. He lifts up the discarded incendiocannon and sets fire to the village. He can hear the hiss of the boiling blood and hot steam gusts of bursting entrails. He hears laughter.

Who could laugh at such a massacre? Who could find humor in this rain of blood? It is Magnumpi laughing!

Magnumpi wakes up inside a dark metal cylinder half-full of water and pounds his fists on the inside. The bwooming sound summons a man who opens a hatch.

Magnumpi are you okay? He asks.

The light is so bright for Mangumpi, he doesn't remember anything. Is Magnumpi even his name?

You were in a sensory deprivation tank Magnumpi you asked us to do it so you could forget about the war. The man says.

Magnumpi has no choice but to believe him.

It's okay says the man you were hired by the famous author Higgins while you were in the tank. He wants you to live in Hawaii and become a cop.

As long as I don't have to wear a uniform. Magnumpi jokes. 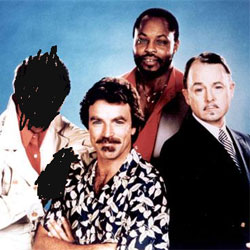 Magnumpi arrives on Hawaii Island in search of fame and fortune as Higgins Cop. He goes to Higgins fortress and wonders if Higgins is a vampire because he never sees him at day. Higgins has an uncanny control over animals. A shapeshifter? Higgins wants Magnumpi to investigate the disappearance of a man. Magnumpi knows this man. Magnumpi was fighting in his unit in the war.

Sergeant Croll wore a cloak of unfolder skin and had black eyes like a spider. He sent a legion of enemy warriors into the fires of hell with his scimitar and lashgun.

Now he sells condos to people on Hawaii Island and has a beautiful wife named Roth. Magnumpi and Roth have good chemistry and she aids him in his search for her missing husband at the behest of Higgins. Here hold the wheel he says when they are chasing a lead. Will she touch his unit? Not that they show but it is implied.

At the end they are tricked into a parking garage. A man (mob man?) in a suit comes into the garage with a six-shooter bang bang it looks like Magnumpi maybe shot. Or maybe Roth. It freezes to be continued...