Folk Heroes Of The Internet Frontier

Onward they rode, into the vast unknown. Many were wizened hardcases, their skin leathery from hard years doing what it took to survive the no man's land of BBSes, their eyes permanently squinted against the glow of phantom green text. The majority were fresh faced youths eager for adventure, as if anything good ever came from such folly. They had never left the safety of their GeoCities and so their dulled senses had no frame of reference for what dark shapes stirred out in the beyond. 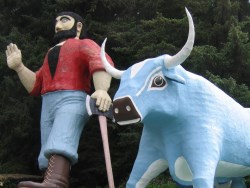 They had no Google. There was no compass to point out the way, aside from the useless likeness of one found within the logo of the equally useless Netscape Navigator. The trails they blazed were forged by instinct. They pushed on as far as each link would take them, the destination never a foregone conclusion but a perilous and thrilling surprise. Some found fertile land and fortune in deep mines rich with Ate My Balls jokes, others found themselves stuck in a quagmire of Under Construction gifs, starving to death before they were able to find escape.

It's impossible to say if there were more tales or pointless deaths in those early days. One thing is for certain, however. As is always the case, both death and story were romanticized until the true human hardships were lost in tall tales. Ever changing with the telling, these stories began as gentle ripples and by the time they reached the shores of civilization they had become unrecognizable tidal waves. Some captured the imagination of fools and endured.

Legend tells of a mysterious woman who strode through every website with a mischievous smile upon her pretty face. Whether a page was personal or corporate, frames or no frames or missing a visit counter, it did not matter. She graced them all with her presence.

Upon reaching the final site she stopped and tapped her chin thoughtfully. When she turned back around, she proclaimed that like-minded sites should not scattered to the winds, but that they should band together. Plucking a single red hair from her head, she wove a ring that was simultaneously no bigger than a coin and large enough to encompass all of creation.

"With this," she stated, "I connect all of the fansites of the X-Files. May they forever be strengthened by the bonds forged today."

So she continued, weaving webrings to link the abandonware sites, the dancing babies and the dancing hamsters, turning disparate outposts into communities wherever she went.

They say there was a man so tall that he could stand in a rippling javascript lake without getting his ankles wet, his massive head piercing a rainbow-themed mouse cursor trail as he straddled half the internet.

This was a giant, peaceful in nature but quick to anger if a web page's font was too small for his taste. He insisted that all headlines appear in 120pt and that they be red, regardless of the background. Many followed his wishes without hesitation. One day he abruptly left, an earthquake trembling in his wake as he strode off mumbling about something called the Drudge Report.

There wasn't a chat room in the world that didn't see a visit from Johnny Chatroom at one point or another. For years he roamed, dropping in to pose the question "A/S/L?" then leaving before receiving a reply.

When he had spread his question every web-based chat room in the world, he turned to IRC. There he was no less prolific, but this time around his query was different. "Can I get Ops?"

No one knows if the Unknown Sage was a man or woman, or from whence they came. What we do know is that he or she was the most prolific soothsayer of the early internet. With over 12,000 predictions spread across just as many guest books, the Unknown Sage shared incredible visions of the future of technology. For instance:

- "In the year of twenty and thirteen, Microsoft will turn from Windows 95 and they shall make their first console, naming it the Xbox One, just to make it very clear that this is the first one."

- "The makers of the world's largest search engine shall one day grow so large that they lose their way, developing a mechanism for one's face that will inject very long needles and shards of glass into one's eyes and skin."

- "There will be a group of people who consider themselves tech personalities, and they will be seen as geek superstars for treating every new gadget, site, and piece of software as the next big thing, often without disclosing their personal investments in the successes of these products. The world will be consumed in a bath of fire."

- "Remember this, for one day it will change your life forever: Kozmo.com"