How to Ruin a Joke 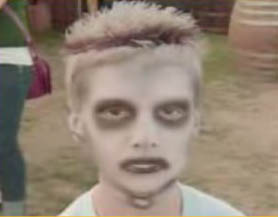 IT BEGINSA disturbing but little-known fact about humor is that, in our modern age of instant communication, the time it takes for a joke to go from humorous to intolerable is roughly 5 minutes--but it wasn't always like this. There was once a time when a joke could be made, laughed at, and occasionally referenced in the future when necessary; unfortunately, this lifestyle has fallen behind in favor of turning every possible online and offline space into an echo chamber where the Internet's shared sense of humor runs everything right into the fucking ground. As I write this, some kid who may or may not be severely autistic claimed to like turtles, which in turn caused CafePress to take over the entire power grid of the West Coast in order to keep up with the demand of "I like tuhtles" merchandise. So when you wander onto campus this week with your newest Internet meme printed on the rugged cheesecloth that is a CafePress t-shirt, you'll know it's safe to drag anyone behind a truck who sports apparel featuring animals that have buckets and can't conjugate verbs correctly.

Of course, the utter destruction of humor had its roots planted long before impact font was placed onto pictures of animals with hilarious results. Throughout the 80s and 90s, television shows like Saturday Night Live emitted catchphrases on a weekly basis so bored office workers could have something to talk about during the day in between all of the passive-aggression and daydreaming about rape fantasies. But if you ran into anyone doing their impression of Dana Carvey doing his impression of George Bush, or perhaps trying to emulate Rob Schneider's annoying Richmeister character without realizing the irony of the situation, it was always possible to physically move away from them or poison their coffee a little each day until total paralysis set in. And, even when catchphrases encroached upon our daily lives, it was sometimes adorable to hear a mother or confused relative playfully mutter something like "No soup for you!" if only to prove that they didn't take NBC lightly when the network told them Thursdays were "Must See TV." 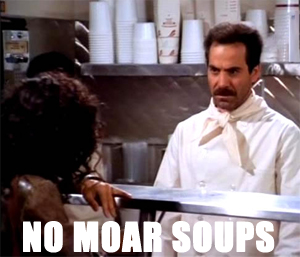 DRAMATIZATIONBut if Seinfeld episodes like "The Soup Nazi" had aired ten years later, think of how much more grating the reaction would have been. Millions of images of Jason Alexander emblazoned with the caption "I LIEK SOUPS." Millions more pictures of the Soup Nazi, posted in retaliation: "NO MOAR SOUPS." Naruto music videos based on the joke. Soup references in every webcomic. Soup Nazi cosplay. Peak Oil reached. Ron Paul elected President. The world's volcanoes erupt in unison. All because the Internet ruins everything.

And because you're on the Internet, it's very likely that you're ruining something right now.

Before you scoff, please humor me. Look down at your shirt. Does it have a sassy quote on it, possibly originating from the Internet? Is it tucked into your cargo shorts? I want to help you. But first, I must detail how a joke gets ruined in the foolish hopes that you will never do this again.