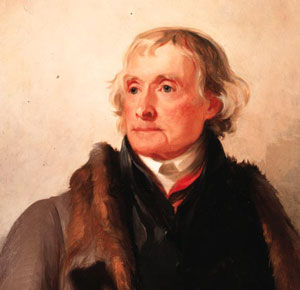 Thomas Jefferson was one of America's most influential presidents, still ranked today as "America's #3 President" and "one of America's Founding Fathers" by enthusiastic fans. His face is immortalized on , and the nickel is immortalized in 3d on Mt. Rushmore. In comparison to modern presidents, Thomas Jefferson is like some mythical figure possessing traits long absent from the world of man. Our presidents today are sad, pudgy men of few intellectual insights and few talents outside of standing in front of a podium delivering pre-written speeches. Jefferson was a true renaissance man. In addition to painting part of the Sistine Chapel while on vacation, Jefferson was a master architect who constantly built and rebuilt elaborate buildings and contraptions, such as the very first library bookmobile, which at the time was pulled from town to town by horses, slaves, and sometimes Indians captured from the various Indian legions terrorizing America. If the cosmic forces were to interfere and bring both Jefferson and Jimmy Carter back to life for purposes of having them compete in a home building contest, Jefferson would destroy Carter. One would build a veritable Taj Mahal, the other would build a glorified moonshine shed.

One of Jefferson's most endearing legacies comes from the fact he liked to write a lot of letters to various people residing on the planet and the scattered lunar colonies of the age. Letter writing was something of a brief fad, lasting a few thousand years, where people would write down messages and then have them transported to entirely different locations, where a recipient would then read them and perhaps respond in kind. While we don't have anything like that in our modern age, it was quite a popular means of communication back in the good old days. Most experts agree that Thomas Jefferson was at least a level 58 letter writer, making him one of the fiercest of the art. His exchanges with John Adams are regarded as some of the most famous in history, as well as the inspiration for fifteen of America's greatest sitcoms, including "Three's Company" and "My Mother the Car."

Jefferson took it upon himself to respond to every letter ever written to him, regardless of whether he knew the author or not. In turn, people wrote to Jefferson requesting all manner of advice, from the extraordinary to the mundane. I sometimes turn to the letters of Thomas Jefferson when I need inspiration or sagely wisdom to help me overcome my problems, which most often involve street gangs and poison centipedes, if not a deadly cocktail combining the two. I'd like to take some time and share some of my favorite of Thomas Jefferson's letters. I have chosen four that cover a wide range of subjects showcasing not just his genius and wisdom, but also providing answers to problems that many of you are no doubt facing. Please enjoy!

I am pleased & flattered that you wrote to me for advice, though it saddens me to report that your decision, however well intentioned it might have been, was in haste. As I write this, I am quite certain your horse, failing some miraculous preventative measures on your part, is no more than ash. In the off chance your horse is still somehow alive & ablaze when you receive this letter, let me be first to suggest that you immediately submerge the equine in the nearest available source of water and, failing that, smother the flames with a blanket of sturdy constitution. I must say that I sincerely doubt this letter will arrive to you in time to save the animal, but if it pleases you to know I made certain to write as fast as my arm could manage and respond in as timely a manner as circumstances dictated. Should you encounter emergencies of a timely nature in the near future, I beg of you to make use of the resources & knowledge at hand as they might perchance provide you with quicker resolution.

Jefferson was not afraid to offer input into matters theatric. His exchanges with a young playwright show an uncanny eye for ideas well ahead of their time.

I have at last finished reading the draft of the play you have written, and I must confess finding it lacking it several key areas. For I am a man who enjoys the theater of the mind, I am disappointed by the play's lack of depth and, sadly, its banality. What I foresee setting the audience's fires alight is a grand spectacle of explosive action, witty quips & tremendous fights. If you could perhaps work in a gentlemen forced to pretend he is of queer persuasion & mind to fool a landlord into letting him room in ungentlemanly custom with two unmarried women, I do believe you would find your audience embroiled in laughter as I am now in writing this. I have further notes on that should you desire to incorporate such an idea into your work. Lastly, do not fear exploring the dynamics of flatulence, a subject known to produce hardy relief in bowel & spirit.

P. S. Perhaps you should also consider indulging the idea of annotating the differences between the races of man from an enlightened, humorous perspective. 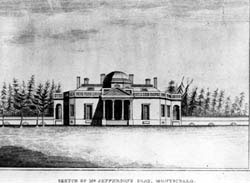 Amazingly, Jefferson displayed a keen eye for understanding the technologies of the future, as demonstrated in this highly mysterious letter he wrote. Historians speculate this was scribed during the period that Jefferson mistakenly opened a time portal from 19th century Monticello to 21st century Des Moines, Iowa. The famed 2003-2004 Des Moines phonebook that sat in his possession is routinely cited as evidence to support this theory.

Your last letter to me, dated May 12, 2004 was received here some weeks ago on Oct. 17, 1819 by way of the large glowing sphere in my parlor, which I shamefully admit requires further revision to perfect the architecture. Forgive my late response as I have been recovering from illness that has hampered my body and produced an excess of thought.

You wrote me an impassioned letter describing a connectivity issue causing you great toil and grief. I am pleased to write that the act of Powercycling your modulation device might do away with your ills. Should the process succeed, you will note the lanterns on the device synchronize, signaling your departure from stormy weathers. Altho' it has been many days since you scratched your words upon the surface of paper, I hope this solution may bring you solace & joy and freedom from the burdensome failures of your technological assets.

your affectionate friend from beyond,

As stated before, Jefferson was a true renaissance man. If there was a trade or hobby to be pursued, at one time or another Thomas Jefferson surely mastered it. From owning slaves to agriculture and necromancy, there was no one superior to him. This next letter reveals some of Jefferson's lesser-known hobbies, making him even renaissance manlier.

I found myself gravely distressed after reading your letter detailing your struggles with local rapscallions belittling the animals at your petting zoo. As I have at one time dabbled in the realm of operating a petting zoo, I can relate to your concern for the mental welfare of your beasts. Sadly, my own petting zoo aspirations ended tragically in a collusion with another pursuit of mine: beekeeping. Should you also masquerade as a beekeeper, know that there are matters of space to consider when choosing the location of your beehives. Proximity to nearby structures & creatures is of definite concern.

The animal mind, simple as it may be, houses many secrets and can often be molded for better or worse by the actions of man. These youthful rapscallions will surely cause grief for your animals, which in turn is certain to cause you displeasure. I suggest enlisting the aid of a night watchman to keep guard around the premises when you are away or in slumber; and initiating as a prerequisite to admittance a policy that an adult of good standing accompany all youths into the petting zoo.

Should the youths continue to trouble the animals, I humbly suggest you yourself stand guard at their usual time of appearance, armed with weapon & fortitude, to send a message to those who would seek to expand your suffering. A showing of force, even if merely theatrical, will most certainly dissuade the rambunctious heart.

your faithful friend and fellow zookeeper,

What do these letters tell us? They tell us that there is wisdom in the writings of our founding fathers, as out of touch with contemporary American values as they might have been. I suggest you take some time from your busy schedule of lifting weights or watering your ferns and brush up on some history. Read the letters of Thomas Jefferson, who like Abraham Lincoln before him, shaped the foundations of this country we are so rapidly tearing to pieces. I also suggest we think long and hard about whether or not we ever want to elect a dog as president. I personally think the time is right.