Excerpt from Chapter One of Macro Aggressions: Zero Safe Space by T.H. Brightstone 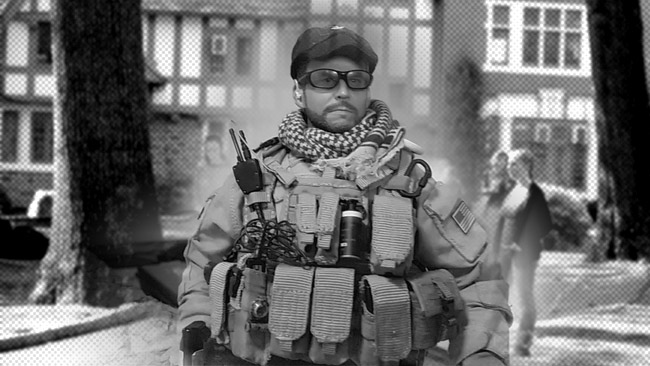 Jeff Caliber was on a top secret operation to catch and compromise to a permanent end the Iranian terrorist Muhammad Al Badi when his Blackhawk helicopter was shot down and his legs were blasted to pieces. No one thought he could recover, but he has beaten all the odds to walk again, right into Sarah Lawrence College in Yonkers, New York, where he is studying military history and creative writing. No one on campus was ready for the plainspoken and definitely un-PC Jeff Caliber, least of all the illegal infiltrators planning to take over Sarah Lawrence College.

"You will respect the flag at all times," promised Jeff Caliber, holding the punk by the back of his head. "If it so much as touches the ground I am going to kick your ass from here to the coffee shop that won't let me in because of my so-called racist t-shirt about bacon and Islam. It's a religion, not a race, it can't be racist."

Several attractive young college girls walked past and they were duly impressed with Jeff Caliber's Judo arm lock and his use of pressure points trained at the SEAL academy. He smirked at them. He knew the type of girl they were. All hat and no cattle, his best friend Tex would say. They like to wear yoga pants but you stare at their butt for over a minute once on an elevator and suddenly it's time to take back the night.

"I'd like to see them try without quad-optic panoramic night vision goggles," he muttered, turning back to the flag-disrespector whimpering on the ground. "As for you, I don't care if you work for the grounds keeping staff or not, it is now your assigned duty and your duty by your American birthright to honor the American flag. Or I will kick your ass up and down shit street."

"What does that even mean?" The man whined in an extremely girlish voice.

"It means your ass is cooked," chuckled Caliber, rising to his feet. He smiled for the first time in weeks as he watched the scuffed up flag hellion scamper away. Then he remembered his 9:30 AM creative writing class with Andrea Goldman. Time to redeploy from the Ruth Leff Siegel Center to his class.

On his way, Caliber has to pass several groups of students. He made sure to shove through the middle of all of them to assert his Tier One Alpha status. As he was approaching the fourth group of students he noticed they were playing with devil sticks, but they were unusually good at them. Most of the beta or lower males in this AO were incapable of balancing the sticks with such skill. These swarthy men were clearly professionals.

Suspiciously professional. With the sort of reflexes a man like them could only learn at a camouflaged training camp somewhere in the jungle. He could also hear them talking in a language that did not sound like English. As he passed through their midst, batting aside a devil stick, he heard them talking excitedly and realized they were speaking in Venezuelan. Venezuela, infamous socialist nation and sworn enemy of freedom. They should have been stopped at the border with their devil sticks.

But at a liberal college like Sarah Lawrence, tolerant of everyone who isn't wearing a bacon t-shirt, he was forbidden from capturing and interrogating the men. All he could do was stare at them and make a gesture of dragging his thumb across his throat.

"Not on my watch," he warned them and continued on to class.

There was about to be Zero Safe Space and only the most un-PC man on campus could stop the slaughter.